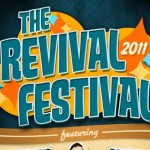 2011’s installment of The Revival Festival in Austin, TX by many measurables was a rousing success. Putting together the headliners of Hank Williams III and The Reverend Horton Heat, they created a festival that didn’t appeal to just one demographic, and they were rewarded by the biggest attendance The Revival Fest has seen. It also created a cool mix of people: the rockabilly and classic car crowd, but with Hank III merch-sporting cowboys and general rednecks as well. Revival Fest also facilitated May 28th being officially deemed “Rockabilly Revival Day” in Austin, TX by the mayor.

My sole criticism of the experience would be the “grounds” for the fest, which were no more than a fenced-off asphalt parking lot that smarted like a cast iron commode in the sun on bare ass during Saturday’s cloudless, 90’s-something day in central Texas. When evening fell, the scene was quite pleasant, with falling temperatures and a breeze blowing through the rising buildings of Austin’s downtown creating a cool panorama for good music. But the opening bands fought with thin crowds as folks braved the elements as long as they could until eventually retreating to 6th St. bars to cool down and rally for the major acts.

But what do you come to a music festival for? The music, and the music was spectacular. The fans may have been fatigued by the fainting heat, but the few first bands fought through it with heart. Matt Hole, The Hillbilly Hellcats, and The Chop Tops all put on excellent sets.

As the sun began to fall and the festival fill up, bass madman Lee Rocker took the stage. You may have not heard of Lee Rocker, but you’ve heard his music, and specifically his bass work. Along with Brian Setzer, he was a founding member of The Stray Cats, and sung on some of their bigger songs as well. Lee Rocker (or “The Stray Cat” Lee Rocker as he prefers) was not afraid to strut his Stray Cat heritage, as his set was mostly material from that project. It’s sometimes uneasy when you see one member of a big band play songs with his own band, but in the case of Lee Rocker, the performances were so good, you couldn’t help but be sucked in. Classic Stray Cat songs like “Stray Cat Strut”, “Built For Speed”, “Runaway Boys”, etc. gave up nothing to their original counterparts and got the rockabilly crowd swinging.

Next up was Hank III, the unintuitive but intelligent pick for co-headliner, and probably the most anticipated of performers, as some fans were hoping to see maybe a glimpse of what he had to offer in a post-Curb Records environment. Unfortunately III did not bring any new songs out with him from Tennessee, but he did bring an ace-in-the-hole, the legendary chicken-picking Johnny Hiland, who though has appeared on nearly every Hank III record, has rarely if ever performed with him live outside of Nashville, especially for a whole concert.

Add Johnny to the lineup and Hank III’s “Damn Band” was like a wall of sound with seven players, and when screamo man Gary Lindsay came out for the middle of the set, that made 8. At that point it felt more like a true revival, with anybody and everybody with an instrument hopping up on stage to join in. Props must be given to the Revival Fest sound crew for excellent sound all night, including keeping Hank III’s set clean. You could always hear whoever was taking a solo over everything else. The beginning of Hank III’s set seemed catered to Hiland’s presence, as they started off with “Nightime Ramblin’ Man” and “Trashville” before launching into his usual opener, “Straight to Hell”.

Maybe it’s because this was just a one-off show for Hank, or because he hasn’t played live in the last 9 months, or maybe because Johnny Hiland was behind him on stage left, but Hank III put on the best, most energetic show I’ve have seen from him in the last 4 years. And this was a strictly 1 1/2-hour country set, no Hellbilly or Assjack. And the songs came rapid fire. You couldn’t fit a piece of paper between songs, and the crowd went wild, feeding off of the high energy from the stage.

Finishing up the night was the legend himself, The Reverend Horton Heat. After the 8-member madness of Hank III and the departure of some of his fans after his set, it did feel slightly like a downgrade in energy when The Rev hit the stage, but that is where he belonged, in the final slot. Being around for 25 years now and being one of the originators of roots revival music means The Rev deserves whatever reverence a revival festival can bestow. 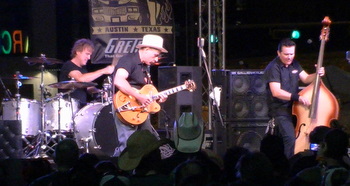 Seeing that it’s their 25th year, the band took the opportunity to play a history of their music, starting with their first album and playing selections from their releases in chronological order. Being from Dallas, I will always hold The Reverend Horton Heat in high reverence. Before BR549, before Big Sandy, before any talk of “neo-traditionalist” movements or swing crazes, The Rev was playing hollow body guitars and standup basses, kicking it old school before old school was cool. Some of the talk about The Rev these days is that he’s been “slowing down” over those 25 years, becoming “consistent”. I do think Jim Heath is approaching music differently than he did 20 years ago, but if you approach his music differently too, it is still excellent. And The Reverend Horton Heat will always be an original, and Jim Heath is the king of psychobilly, and an outright guitar god.

I have to give mention to the folks I ran into there, principally Tracy & Gina Gallina Hancock (Wayne Hancock’s wife) from Road Bound Booking, Shalonda from SixTone Presents in Oklahoma, Little Lisa Dixie, Liz Sloan aka Bob Wayne’s fiddle player, Jake who is Two Cow Garage’s biggest fan, the woman who wore chaps with the top half of of her cellulose-riddled ass hanging out of the top, and the man wearing only a Texas speedo and confederate flag cape who at the end of the concert took to the skies like Super Grover to fight crime and keep Austin weird.

I think it would be great for The Revival Festival to maybe find a patch of grass to pitch their tent on in the future, but except for that, the music, the security, the presentation, sound, and professionalism were all top notch, and the festival was thoroughly enjoyable.