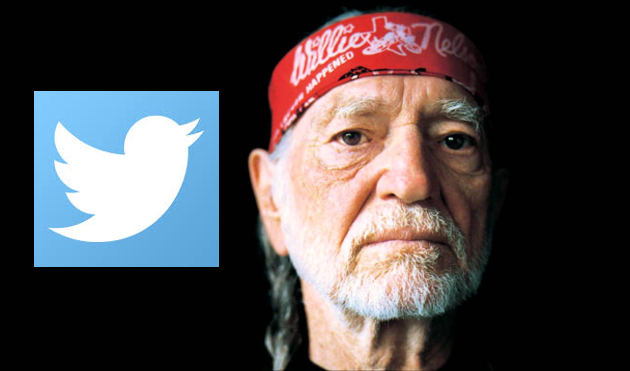 Some use Twitter, and some don’t. Whether you happen to be on the format or not, it’s an invaluable tool for many music artists to get their information out to fans and the media in a quick and easy manner. Some artists really emphasize their Twitter and social network presence, and for others it’s an afterthought, if they even pay attention to it at all.

Willie Nelson’s Twitter page was initially launched in August of 2008 and definitely fell more into the active category, especially in recent years, not only helping fans keep up with the country legend, but sharing information about the many causes Willie champions. Recently a picture Willie posted on Twitter of a weed-inspired Christmas sweater from his friend Snoop Dogg went viral on the format, for example.

That’s why it was so strange when a few weeks ago Willie Nelson’s official Twitter account converted to an entirely new account called “lolwut?,” and started exclusively posting links to stories on viral content farms like Viralthread and Distractify—in other words, content from a bunch of aggregated clickbait funnels that have consumed the internet over the last few years.

Some of the people who follow Willie on Twitter may have not even noticed that it was Willie’s account that was all of a sudden converted to the new “lolwut?” account, and just all of a sudden saw a bunch of unusual links filling their feeds. The new account is posting approximately 50 links a day, and appears to have taken over on January 20th. All identity information from the former Willie Nelson Twitter account has been scrubbed, as have all of Willie’s previous Tweets. The links to Willie Nelson in Snoop Dogg’s weed-inspired Christmas sweater? They’re all broken now.

So what exactly happened? Did Willie get hacked? Did he sell his account to whomever is now operating the ‘lolwut?’ Twitter page? Saving Country Music has reached out to both the Willie Nelson camp and Twitter, and has received no response. There is another Twitter account that is @WillieNelson that says it was started in January 2017 (probably about the time ‘lolwut?’ took over the old account), and it is also linked to via the Twitter icon on Willie Nelson’s official website. But so far there are no tweets, only a few followers, and the avatar starter egg has not been replaced. Meanwhile many of the 620,000 people following the ‘lolwut?’ account started following to get information about Willie, who’s recently been battling health concerns, and instead are getting spammed with viral posts.

Whether the account was hacked or sold, it has to be one of the biggest cases of a Twitter account from a world-recognized celebrity being re-purposed, yet nobody is reporting on it, and nobody seems to want to offer an explanation. More information if and when it becomes available.