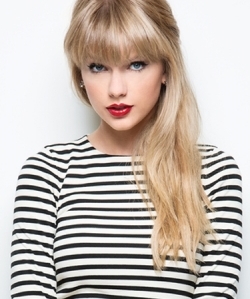 Ooooh! Ahhhh! What forever will Taylor Swift announce when she holds her much-anticipated live Yahoo video stream and Q&A on August 18th at 5:00 PM Eastern????

Give me a break.

The histrionics that mainstream country artists (and Taylor Swift too 😉 ) go through to release an album, and the hoops they make their poor fans jump through these days is just a little bit silly, don’t you think? Brad Paisley still has the majority of his gullible fans svengalied into believing he’s in trouble with his label for releasing irrelevant three-second snippets of the dumb songs from his upcoming record, and Eric Church is still trying to rationalize why he blew a 7-figure budget on producing cryptic teaser videos for The Outsiders that barely anybody watched. Come on Music Row, we’ve got shit to do. Just tell us when you’re going to release the damn thing and we’ll pony up the dough. Maybe. Or probably not.

Yes, Taylor Swift will be announcing her new album at this August 18th press conference. And she will release a single on the same day or shortly thereafter that she will preview during the event. And then she will perform that single on the MTV Video Music Awards (or VMA’s) on August 24th that she’s scheduled to perform at. And water is wet.

All of this has been preordained for quite some time ladies and gentlemen, and it is all transpiring as predictably as the lyrical hook of a Bro-Country song (Oh, you rhymed “beer” with “Girl, get over here“? How clever.)

According to Saving Country Music’s vast circuit of moles covertly embedded throughout the inner workings of the country music’s sprawling industrial complex that feverishly feed information into this site’s coffers to be aggregated an analyzed (or actually, this random dude on Twitter), Taylor Swift will release her new album on October 13th, 2014. Or basically, two years after she released released her album Red (October 22nd, 2012), and four years after she released Speak Now (October 25th, 2010). But yes, nothing, NOTHING about this Taylor Swift album release business is in any way predictable. So let’s just all pretend this upcoming press conference is about her re-uping her endorsement deal with the sensible yet stylish canvas shoes known as Keds so we can act surprised when she tells us a bunch of crap we mostly already know.

And the album will be named A Delicious Journey.

Actually I just made that up. I have no idea what it will be named. But it will probably be something fruit flavored and effervescent like that. Say my sources.

This is when I arrogantly point out that way back on June 11th, I predicted:

About the only thing I’m sweating at this point is the wild-assed, harebrained prediction that Justin Timberlake has anything to do with this Taylor Swift album business that was based simply off a hunch and a little timeline syncing. But hey, if it pays off, I look like a genius. So there you go.

UPDATE (8-18): Rumor has it that Taylor Swift new single will be called “Shake It Off” and is a very pop-oriented song in a similar vein of the first single from her last album “We Are Never Ever Getting Back Together.” It supposedly includes a horn section, and very little guitar. It also apparently contains the line, “They say I date too much and can’t make ‘em stay,” calling out the critics of her personal life. Some radio has already received advanced copies of the single.

Let’s face it, if Taylor Swift wants out of country, she’s screwed. She could release an album entirely of rap songs without a single human-played note on the entire thing … and it would still be considered country. Why? Because there’s numerous “country” artists who’ve already done this exact thing. If you release an album in 2014 and you’re white, then yeah, it’s pretty much country. Or it’s Imagine Dragons. Go listen to Jerrod Niemann’s “Drink To That All Night” or Sam Hunt’s “Leave The Night On”. Country music has literally regressed farther away from the genre’s roots in the last two years since Taylor Swift released an album than it did during the entire history of the genre before.

Though it may sound impossible to some, Taylor Swift’s new songs will be even more pop than what her music was before, and they still won’t have the power to extricate her from the genre. Country music co-opted pop, rock, and rap into the mono-genre, and now there is nowhere for Taylor Swift to go. And still, though not country by any stretch, Taylor Swift’s music will be better and more original than most of the gunk residing under the “country” flag.

READ: Taylor Swift Is Leaving Country. But Will Country Let Her?