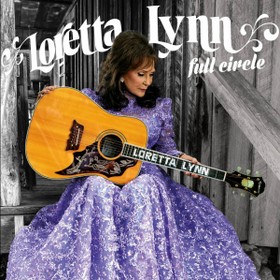 Loretta Lynn will be releasing a new record, her first since 2004’s critically-acclaimed Van Lear Rose, when Sony’s Legacy imprint releases Full Circle on March 4th, 2016.  The news was announced Tuesday morning (11-10), but Saving Country Music told you to anticipate the new Loretta release way back in November of 2014 when it was first revealed Loretta had signed up with Sony’s Legacy imprint. At the time, Loretta explained she had recorded as many as 90 songs, including some old classics, and some new renditions of her own hits. We see this come to fruition in the fourteen tracks of Full Circle.

Full Circle finds Loretta remaking her classic hits “Whispering Sea,” “Everybody Wants to Go to Heaven,” and “Fist City,” along with the traditional country tunes “Black Jack David” and “I Never Will Marry.” The album also includes collaborations with Willie Nelson and Elvis Costello, and a few new original tracks.

The release of Full Circle is also timed to coincide with the airing of American Masters Loretta Lynn: Still a Mountain Girl, which will debut on PBS on the evening of March 4th, 2016 at 9 p.m. on most stations.