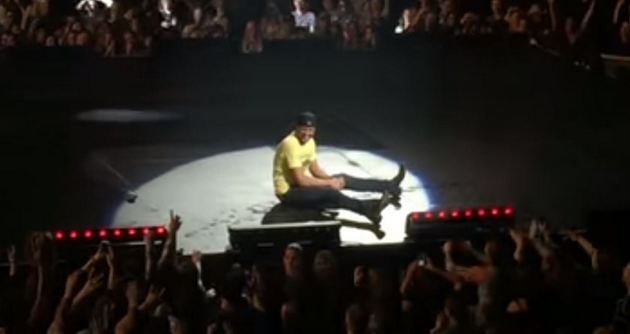 When they compile a highlight (or lowlight) reel of Luke Bryan’s career, along with his Greatest Hits, they’ll have to include his greatest falls. There was a reason that at the CMA Awards in November, co-host Carrie Underwood referred to the Georgia son and spitting image of Gomer Pyle as “Luke Stagefaller” in their opening Star Wars skit. And now we know who not to pick when the draft comes due for the CMA Fest’s City of Hope celebrity softball game next summer. Pitch and catch is not as easy for Luke Bryan as it is for most.

On Thursday night (2-25) at Montreal, Canada’s Bell Centre, Luke Bryan was singing “I Don’t Want This Night To End” when his night almost ended abruptly after he bit it on stage. What actually caused the fall remains unclear, though it happened right after a stage hand tossed the singer a can of beer. Bryan is walking out on the runway of the stage, blowing kisses to the crowd when someone appears to gently lob the beer in his direction. Bryan sees the beer and first starts backing up before deciding to try and catch it. The beer falls and rolls down his back calf, but then all of a sudden like his Achilles snapped, Luke goes down in a lump. Perhaps something was wet on the stage, or perhaps Bryan is just as coordinated as a toddler.

This is the first fall of Luke Bryan’s “Kill The Lights Tour” that’s just begun, but there promises to be plenty more where that came from. Luke has a long history of struggling to stay vertical on stage.

And while we’re at it, here’s a recent video of a girl on heavy meds after wisdom teeth surgery crying for Luke Bryan.