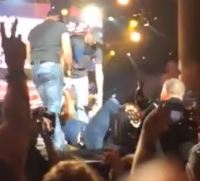 Not that delighting in the misfortune of another human is a trait any of us should possess, but Luke Bryan’s new side hobby of taking dives off of stages has become almost comical in its frequency. Greg Louganis, eat your heart out. It wouldn’t be as easy to find the humor in the situation if Luke Bryan had found himself seriously hurt in any of the incidences, but that seems to be the only fortune that can be found in now his troika of famous stage tumbles.

At Luke Bryan’s show Saturday night (8-30) at the Klipsch Music Center (Formerly Verizon Wireless Music Center) in Noblesville, Indiana, Bryan bit it yet again from stage when someone tried to toss him a beer. “If you’re gonna fall off stage, do it while trying to catch a beer,” an embarrassed Luke Bryan said after he finished the song. “Now which one of you grabbed my ass? I’m about a quart low. Checking my damn oil down here. “

Shouldn’t that be “two” there Luke? Maybe Bryan did bang his noggin after all. It was the singer’s second successive night at the Klipsch Music Center near Indianapolis, but that apparently wasn’t time enough to help familiarize Luke with his surroundings. But Bryan claims he’s okay. “All good here. No bumps or bruises. Our stage is different in every amp. Little stage variations. Hell I gotta just pay more attention.”

Luke landed on a pair of sisters in the crowd, including one who walked away with a black eye. Luke later made it up to them by inviting the concert going party backstage.

This is the third famous slip the country music sexy man has taken in 2014 alone. On February 17th Luke Bryan slipped on stage in Greensboro, North Carolina. Then on May 29th, Bryan took a more serious tumble off the stage that resulted in a few stitches in his leg. “So check this out. Check this out. The last time I was in North Carolina, I busted my ass on stage,” Luke Bryan said to the crowd after he’d recovered. “What is it about North Carolina that makes me bust my ass?” The second falling incident also involved alcohol. A cooler full of ice and bruskies had been poured out on stage earlier in the performance by Bryan, leaving ice in the area where he slipped. Luke Bryan’s had a few other famous tumbles over the years.