Trigger Down with Pop Country 66 Comments 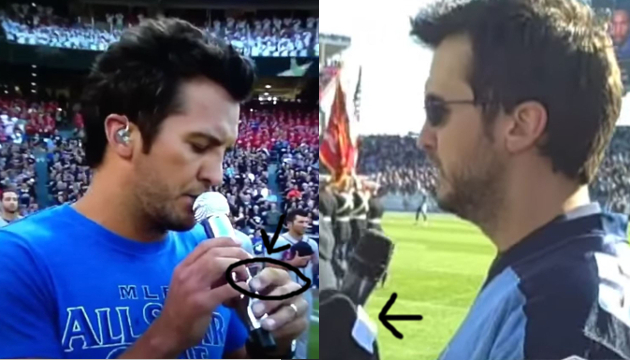 Look, I know it’s super easy to sit behind a keyboard and criticize a performing artist, while it takes guts most can’t muster to stand unaccompanied in front of millions and belt out a challenging composition knowing full well that if you slip up even an inch the public will descend on you like a hoard of jackals to tear you apart piece by piece and point laughingly at your privates.

But is it too damn much to ask of the National Football League to find somebody to sing The National Anthem at the Super Bowl that has an established history of actually knowing the words to a song most 4th graders are tasked to recite verbatim before ascending to middle school instead of a performer with a sullied past of sliding by using cheat sheets and subterfuge like Luke Bryan has?

This isn’t a brand new single about date raping some chick on a back road in your truck written by four other songwriters like some of Luke Bryan’s godawful singles of late where I guess teleprompter assistance is understandable, this is the 200-year-old anthem of our nation. In such a high-profile setting, how about we find someone who can turn in a stirring performance coming straight from the heart as opposed to scribbled on the side of his hand?

When Luke Bryan performed The National Anthem during the 2012 All Star Game, he was caught reading certain portions of the song off the side of his hand as he tried to hide it from everyone and pass off as looking at his watch. Luke Bryan later fessed up and apologized, saying,

“I really wanna explain the national anthem performance from last night…I had a few keys words written down to insure myself that I wouldn’t mess up. I just wanted to do my best.”

Luke Bryan has pulled a similar ruse during other National Anthem performances, including in 2008, taping a piece of paper to his gloves at a Titans vs. Browns game. But I guess this is better than what Aaron Lewis did when he train wrecked his performance of The National Anthem during the 2014 World Series, which was especially ironic since Lewis had previously railed on Christina Aguilera for screwing the song up herself.

Of course, having to suffer through Luke Bryan’s rendition of the Star Spangled Banner will pale in comparison to the national pain we’ll all suffer when Lady Gaga descends from the roof of Reliant Stadium during the Super Bowl halftime show riding a dildo-shaped unicorn. Then as a children’s choir fake sings to a backing track and performs tightly-choreographed exaggerated gesticulations, underlings will vomit on Gaga just like they did at her Doritos-sponsored set at SXSW a few years back as Gaga herself goes on a political rant that forces television censors to bleep out F-bombs and terroristic threats to heads of state, all while Gaga inexplicably attempts to position herself as being unwaveringly on the side of “love.”

It would seem like a pretty simple litmus test: find someone to sing The National Anthem that actually knows the damn words. If you can’t fulfill that simple task NFL, then I’m tuning over to The Puppy Bowl, at least for the opening portions.