Trigger Down with Pop Country 141 Comments 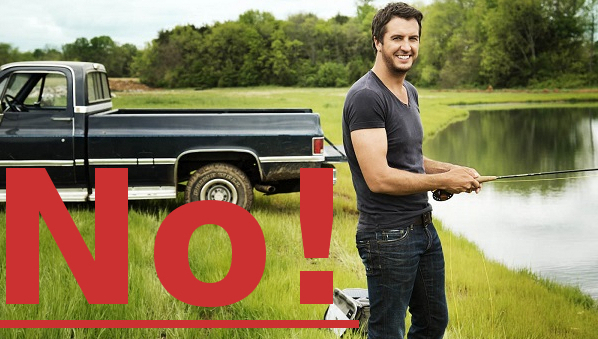 Like the unwanted advances of a male superior that uses their aura of overbearing power to justify wanton unavoidable passes upon your poor defenseless frame, fully knowing their position of authority will shield them from any repercussions, and any efforts to be awarded recompense for their inappropriate actions will only result in more injury as they exploit their position of power to circumvent all avenues of justice, the audio emanations from Luke Bryan’s new song “Love Me In A Field” move upon you so offensively, scandalously compromising your private space and the security of your personhood, you feel nothing short of violated as the music sweeps across your skin like a pair of fresh hands hell bent on performing a bout of heavy petting that is completely unauthorized and impermissible by law in the majority of jurisdictions and municipalities in this great land.

Of course directly comparing actual sexual assault to the displeasure one may find in the bombardment of even the most noxious musical concoction like the one Luke Bryan has brewed up in his single “Love Me In A Field” is disrespectful to such heinous acts and its scores of daily victims in a world that seems to be trending towards the ultra-misogynistic after so many years of inroads towards equality and respect. But Luke Bryan’s ridiculous ode to having intercourse in arguably the most inexplicably inhospitable places possible makes the subject of the mistreatment and objectification of women especially topical.

“Love Me In A Field” makes the American farm sound like Walt Disney’s model for a sexual theme park, while the reality of things facing the American farmer is either selling out to Monsanto, or having 200 years of your family’s legacy parceled out in a bank liquidation due to falling water tables and intrusive estate taxes until all you have left to show for multiple generations of sweat and toil is a sliver of land just big enough to park a singlewide on so you can cook meth for the remnants of your impoverished and decimated local community.

But that’s not the picture “Love Me In A Field” paints, as the poor object of Luke Bryan’s affection is forced to perform sexual intercourse amidst the serrated edges of cotton shrubs, the intrusive ears of corn protruding from 10-foot stalks, atop mounds of beets (have you ever had a raw beet riding in the small of you back whilst a 200-lb human hunches atop you?), and possibly the worst, out in a field where cows may or may not have shat very recently (as explained in the song). This could only be written by city slickers who only know about farm life through proxy, because anyone whose had their hands on the roughage soliloquized about so lovingly in this song as an idyllic love nest would never want their exposed posteriors or privates potentially interfacing with such knobbly and brambled plant matter.

This is not a joke; this is the actual chorus of “Love Me In A Field”:

River bottom ground? This all makes the Talking Heads’ “Sand in the Vaseline” sound downright appetizing after thoughts of vegetation and particulate getting caught up in the bodily secretions of sex makes one wince in horror.

What poor woman is being subjected to such sexual torture, especially when Luke Bryan admits to having a perfectly good California king mattress ready to go indoors during one of the song’s verses. Hey, no doubt there is something special about getting back to nature and taking a blanket under the stars with your lover, but the specificity with which Luke Bryan rattles off the places (and plants) in which he chooses to do his sex business is both disturbing and shudder-inducing. It sounds tantamount to a type of torture as opposed to something to get hot and bothered about.

All this speaks to the ridiculous way the “country” is perceived by the suburban music listener that tunes into the country station for sheer escapism. I can assure you that the only people who have ever screwed in a cotton field did it from having no other choice; not as some enterprise to prove how country they are, or because it’s an especially private or romantic spot. All these countryisms are just like the illustrations on a Candyland board game; fantastical notions about the country from folks who’ve never really been there.

And while you Luke Bryan fans are taking your world rumpus trip around the family farm with “Love Me In A Field” blaring in your 4×4, make sure your final destination is a rendezvous behind the old dairy barn so you can castrate the rocky mountain oysters right off this monstrosity, then run a steel rod right through the noggin and put us all out of our audio misery, ceasing the mental images it so unfortunately inspires.

I’d rather have Donald Trump grab me by the mangina than listen to this.

Love Me in a Field, Luke Bryan