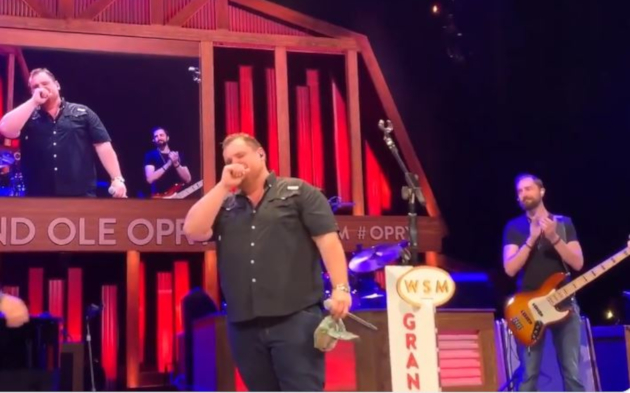 Surging up-and-coming country music artist Luke Combs will be the next member of the Grand Ole Opry. The 29-year-old was surprised during the Tuesday night (6-11) Opry presentation by traditionalist Craig Morgan, country legend John Conlee, and recent Grand Ole Opry member Chris Janson with the invitation. At the request, Combs crumpled at his waste, and burst into tears as Craig Morgan hugged him. Still crying, Combs then had to compose himself to sing another song.

The accolade comes for Combs as his dramatic ascent in country music has become nothing short of unprecedented. After all five of his first singles went #1, including two Triple-Platinum singles, one Double-Platinum single, and two Single Platinum singles, Luke’s new single “Beer Never Broke My Heart” broke singles records in mid May when it received an incredible amount of adds on country radio, debuting at #15. The song currently sits at #10 on country radio. The Charlotte, North Carolina also just released a new 5-song EP called The Prequel on Friday.

Luke’s debut album This One’s For You is a perennial selection at the top of the country albums charts nearly every single week, even though it was released all the way back in June of 2017. The album has now been Certified 2x Platinum. Luke’s current arena tour was also basically sold out as soon as the dates were posted, and will be going strong into December. In no uncertain terms, Luke Combs has been the most successful debut artist in country music since the beginning of the SoundScan era in 1990, if not ever.

The pick will likely agitate a few of country’s traditionalists, but it is a much better selection than some of the other recent invitees, including Kelsea Ballerini who was asked in March, and Dustin Lynch who received an invitation in August of 2018. Mark Wills was also picked in late December of 2018, making the last 12 months a rather busy time for the Opry adding new members.

Luke Combs has been able to build his fan base by being an everyman superstar with sensible songs that don’t overtly offend country’s norms, while also appealing to a wide audience. He obviously will add a shot of youth and relevancy to the Opry membership, while also not shunning its traditions. The only question will be if Combs will be able to keep up with the Opry commitments, which request performers appear around 10 times annually. With such a rigorous schedule facing the emerging superstar, it may be difficult to adhere to these requests.

The invitation also comes on the 70th Anniversary of the debut of Hank Williams on the Opry stage, where he received a reported six encores. Many Hank Williams fans still believe Hank Williams should be reinstated into the Opry after he was fired for drunkenness, and died before he could make amends with the institution. Some will feel like other artists would be a more appropriate pick than Luke Combs, including fans of Jamey Johnson, who has hinted that he’s been asked to join but the Opry has not made it official. But of the current crop of mainstream-level country stars, Luke Combs is one of the more traditionally-oriented, and feels like a better fit than many pop country performers.

BREAKING: @lukecombs has just been invited by @cmorganmusic, @janson_chris, and John Conlee to become the newest member of the Grand Ole #Opry! pic.twitter.com/ua8FSTMPBD