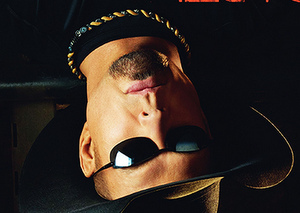 If 2013 was the “Year of the Woman” in country music, 2014 may go down as the “Year of the Fall.” Along with a troika of notable tumbles by Luke Bryan in 2014, Garth Brooks has now bit it on a couple of occasions during his comeback tour. It first happened on Friday, September 5th as his “Garth Experience” was just getting under way in Chicago. The 52-year-old entertainer took a spill and stopped himself only inches from going off the edge of the stage like his hat did. Then this Friday during his Halloween show in Lexington, KY at the Rupp Arena, Brooks took another tumble, but this one involved some extenuating circumstances.

Garth’s stage setup on the tour has more gadgets than a Swiss Army knife. It breathes fire, shoots lasers, belches smoke, has retractable video screens, endless lights, and a glowing “orb” as a centerpiece. Apparently another feature of the stage is some sort of conveyor belt-type device, or a couple of them running opposite ways that work like a suped-up people mover at an airport, rushing Garth from one side of the stage to the other.

While in the midst of singing his cover of Aerosmith’s “Fever” from his 1995 album Fresh Horses, it appears Garths loses his footing on the one conveyor belt, making him accidentally put his foot on the other conveyor belt running the opposite way, and ends up sending him careening out of control. Luckily he recovered quick enough to strike a pre-planned Run-D.M.C. crossed-arm pose with his fiddle player to finish the song.

Earlier that morning, Garth was in Nashville giving music press and industry insiders a sneak peak at his new album Man Against Machine scheduled to be released on November 11th. “Anybody who knows us knows we’ve never named an album after a song, but for some reason this is how it’s been for us since the start of thinking about coming back into music. A lot of things have changed and it’s all up hill,” Garth said. In this instance, it appears the machine won out against man.