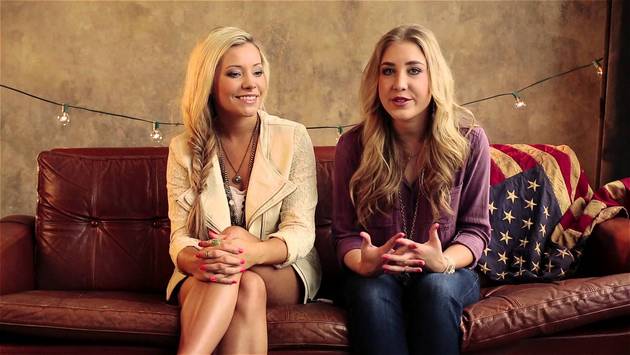 The story of country upstart duo Maddie & Tae only continues to get more juicy and intriguing, and only continues to turn more and more towards a positive one for folks concerned about the lack of roots and female representation in the country genre.

When Maddie & Tae’s #1 country super hit “Girl in a Country Song” hit the airwaves in July of 2014, it was a shot across the bow of Bro-Country, but there were some serious reservations coming from true country fans about the duo’s intentions, and if the song was worthy of rooting for. Were the electronic drums and record scratches at the beginning of “Girl In A Country Song” meant as a stylistic expression, or to poke fun of the hip-hop influences encroaching on country? And when they spoke to the media, the duo tried to soft-pedal what otherwise sounded like some pretty scathing commentary in the song about the way much of modern country represents females.

In numerous interviews, Maddie & Tae said that “liked” or “loved” the Bro-Country artists and songs, but . . .

“Looking good for the boys is not all we have to offer for them. We’re bringing a voice for the girls in country music, and that’s why we came at this topic with a different perspective,” the duo told NPR at the time. “It’s just a trend that kind of became irresponsible in its view of women, so we wanted to come about it from our perspective ”¦ Because as women, we don’t want to be thought of as one-dimensional, and that’s kind of how these songs have been portraying women. So we hope that kind of changes the game just a little bit.”

It was a pretty mixed message, and had some country fans confused.

However in a new interview with Holly Gleason for HITS Daily Double, the duo spills the beans about why they were so political in their initial responses to the song.

“We told some journalists we were joking, meaning we were making jokes about all the stupid things guys say about girls in these songs,” says Maddie Marlow. “Next thing you know, people thought we were saying that we were just kidding . . . We had a media trainer tell us to say we were kidding’ because they were worried people would be mad at us. I don’t think anyone thought it would take off like it did but we didn’t say anything everyone else wasn’t thinking.”

And some were mad at “Girl In A Country Song,” including fellow Big Machine Label Group member Brian Kelley of Florida Georgia Line. In an interview with The Chicago Tribune, Brian Kelley became hostile when the song was brought up, saying, “All I’m gonna say about that is, I don’t know one girl who doesn’t want to be a girl in a country song. That’s all I’m gonna say to you. That’s it.”

But that’s just where Maddie & Tae’s recent revelations begin. Now that the duo has some skins on the wall, and just released their first full-length record Start Here, the young songwriters are starting to throw their weight around like a couple of salty veterans, in an environment where even many of the salty veterans these days are staying mum about the direction of country.

On the subject of drum machines being used in country songs, this is how the topic was handled by Maddie Marlow in a recent interview with The Associated Press:

“Fake drums,” said Maddie Marlow, clenching her fists in mock anger. “I hate the fake drums. Those need to go away!” . . . Of course there’s pressure . . . if you don’t have this slamming up-tempo (song) that has a little rap thing in it, then it’s not going to make it on country radio. We are saying something and we’re not backing down. This is the message. This is what we want to say.”

And the other Maddie & Tae member, Tae Dye, is also getting into the action. Once again speaking with HITS Daily Double, Dye says, “We knew what we wanted to sound like, the country-ness of it. Thankfully, [producer] Dan Huff got it, respected it and knew how to get it. He comes from the rock world, so that aggressive sound is something he does. When he applies it to a banjo or a fiddle, it’s in your face. It’s been a while since country music had some of that, so we wanna put a whole mess of it on the radio. We’re those kinda girls.”

READ: Maddie & Tae’s “Start Here” is a Start on the Right Track for Mainstream Country

This is just a few of many quotes coming out of recent interviews with the duo. And in many moments of Start Here, they put their money where their mouth is, with traditional instrumentation right out front.

Maddie & Tae still may not be the right speed for many traditional country fans. But as time goes on, they sure make it hard not to root for them.