Mainstream country is not stupid. They see the rising tide of Americana artists cresting the country albums charts on a regular basis, the big Americana names selling out large venues and headlining festivals, and doing it all without the help of Music Row or corporate radio, and continuing to encroach into their overall market share. And whether its hedging their bets, hoping for big payouts, or a true appreciation for the music, they want in on the action.

We’ve already been witnessing this for a while with certain artists—the latitude that Chris Stapleton was afforded to record his breakout album Traveller being the most obvious illustration. But now the Americana movement inside the mainstream is showing signs of institutionalizing.

Big Machine Record’s favorite new toy, Midland, is a great example. Counterintuitive to what you would conventionally expect to see and hear from the same label that launched Taylor Swift and Florida Georgia Line, Midland’s taken a classic country sound with “Drinkin’ Problem,” and now made it into the Top 15 on country radio.

Forget the band’s authenticity problems, their success proves that the mainstream is willing to take a chance by putting time and money behind a band that sits well outside the industry’s cultural norms. It certainly helps to be well connected and look the part like the quaffed, refined, and calculated “ruggedness” of Midland does, but if it means better music making its way up the mainstream food chain, we shouldn’t be so quick to complain. MIdland has a classic country, Americana sound. Shane McAnally’s participation in writing “Drinkin’ Problem” proves this Americana push is an industry-wide effort, putting even the hottest names of the mainstream behind more Americana-style projects.

But this is not the only Big Machine artist looking to make waves with a more Americana style. Check out the long haired, bushy bearded Alex Williams with his retro, throwback album cover for his Big Machine Label Group debut out August 11th called Better Than Myself. Boasting to have tracked the entire album live in two days, promotional copy for the Pendleton, Indiana native espouses,

‘Better Than Myself’ is a distant cry from the sugary pop hybrids currently dominating country radio airwaves, and as far as Williams is concerned, that’s a good thing. He’s part of a new breed of upstart outsiders, writing music that at once sounds both modern and traditional, channeling the raw, authentic sound that’s made stars out of outlaw singers and red dirt rockers. 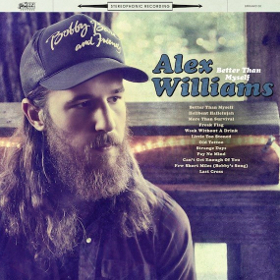 Upstart outsiders usually don’t make their way through the world via Big Machine, but perhaps it’s a new day. And unlike Midland, the Alex Williams story appears a little more authentic to himself. “I played some in Nashville and did the Broadway thing, and I played locally around Indiana some, too, but my first real gigs were in Texas,” says Williams. “I went down there because my cousin owned this shrimper bar on the Gulf coast where I could play. That was a big part of what got me so into Texas and all those Texas songwriters like Guy Clark, Jerry Jeff Walker, and Billy Joe Shaver.”

Again remember, this is a Big Machine artist saying these things. And previewing through the unreleased album, just like with Midland, the music hold up strongly, no matter the marketing angle behind it, or what label has their stamp on the back. Midland and Alex Williams both deserve strong consideration from traditional country and Americana fans.

Not to be outdone, Black River Entertainment—the home of Kelsea Ballerini—has announced their intentions to launch and entire Americana imprint as part of the label. On June 21st the label revealed they had signed established Americana act Carolina Story, and that was just the start of the foray into the subgenre.

“Americana music has a long history of celebrating the authenticity of life lived out through music,” said Black River CEO Gordon Kerr. “We are pleased to begin this journey forward as we celebrate, honor and embrace the art form of American Roots Music. Black River’s vision in establishing the studios, publishing house, management, and country and Christian labels has always been to ‘leave this place better than we found it,’ and adding Black River Americana to our label family is a natural next step in Black River Entertainment’s story.”

What does it really mean when mainstream labels talk about working with Americana acts? It means understanding there is a path forward for artists that don’t fit the standard radio single/arena touring mold. Big labels are beginning to recognize the commercial prowess of Americana, and see it as a lucrative enough opportunity financially to give it a shot.

The Big Machine Label Group recently shuttered the Dot Records imprint and let go numerous artists as part of the move. Scott Borchetta said their expansion had been too robust. But here is Big Machine and other big Music Row outfits willing to expand into the Americana realm, even if their rest of their roster is static, or even in contraction. They’ve looked at the future, and the future is Americana—or at least a world where it has a bigger place beside the mainstream.