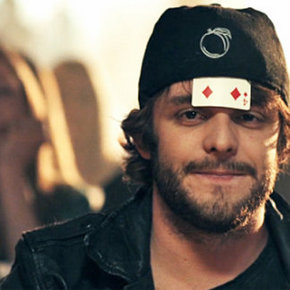 I guess my first question is why stop there? If you already have 14 songwriters on board, why not go for the world record? Throw the barn doors wide and make a party out of it. You want to contribute a word or two? Then come on in! Order some pizza. String up a piÃ±ata. Put a homeless guy on there for shits and giggles. Throw that guy that used to pick on you in high school in the songwriting credits as an inside joke.

While we were busy complaining how every mainstream country song these days seems to require three or more contributors to get cut, apparently that was just the start of where we were headed with contributing songwriter redundancy. With so many hip-hop and EDM influences streaming into modern “country” songs, you have to hand out songwriting credits like Jolly Ranchers to the “producers” on the track that come in and add the drum machine beats and synthesizers, as well as the songwriters of the other songs you sampled so you don’t end up in court over royalty spats.

And that doesn’t even include the actual professional songwriters who have to help polish up whatever turd of an idea the name-brand country star brought into the songwriting session that has to be molded into something at least slightly listenable. By the time you’re done, the liner notes for your song look less like the principles from an intimate brainstorming session hoping to tap into the inspiration of life, and more like the lineup of a beer league softball team.

Thomas Rhett has a new album on the way called Tangled Up, and on it is a song called “Vacation.” Apparently the track sounds so similar to the War standard “Low Rider” that all the original War songwriters had to be given credit on it. But that’s just where the fun begins. Beyond the War members, there’s six other “songwriters” credited, and as you can see in the break down of the contributors below, hip-hop is a huge player.

The 14 Songwriters of “Vacation”

2. Sean Douglas: Songwriter and producer who has worked with Chris Brown, Jason Derulo, 2Chainz, Snoop Dogg, Demi Lovato, Timbaland . . . and Thomas Rhett. Yep, seems qualified to contribute to a country song with reverence and knowledge of the country music canon.

4. Joe Spargur: Pop and hip-hop songwriter who worked with Jason Derulo and Andreas “Axident” Schuller (see above) on the hit song “Wiggle” feat. Snoop Dogg. Is your head hurting yet?

6. Ricky Reed: Producer, songwriter, and multi-instrumentalist who fronts the Oakland-based hip-hop and pop band Wallpaper. Was one of four “producers” on Jason Derulo’s “Wiggle” with Axident, and John Ryan.

All these songwriters, all these credits and contributors, and who wants to bet the track is terrible? And just appreciate that these are just the songwriters, not any “producers” who may eventually be given credit on the track too.

And of course we’re already hearing words like “progressive” being used in connection with Thomas Rhett’s new record. Rehashing old ideas in a vacuum of any new ones is not progress, it’s relying on the creativity of others to skate by.