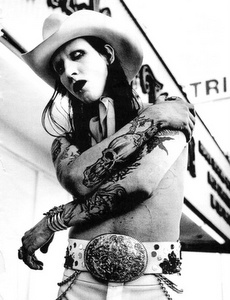 Remember the curious news of how Korn frontman Jonathan Davis was working on some sort of country project, and was in the studio with Big & Rich trying to hone in on the “Bakersfield” sound? Well now the story has turned even more strange. Though we still don’t have any solid details on exactly what Jonathan Davis is working on—if it’s a full blown country album, just a novelty song, or something in between—apparently Marilyn Manson is also on board and could be a significant part of whatever the eventual post-grunge rock gone country output reveals itself to be. There’s even the possibility he’s working on a “Southern-sounding” project himself.

Marilyn Manson and Jonathan Davis were already rumored to be working together on a hush hush project previously. In early June Marilyn Manson revealed, “We hadn’t seen each other in quite some time. Now he and I are talking about doing something completely unexpected together.” Apparently that “completely unexpected” thing could be this upcoming country project. This postulate appeared to be confirmed when during a recent Reddit “Ask Me Anything” session with Manson, he said he is currently working on music that is “acoustic” and “Southern-sounding.”

When asked if Manson would ever do an acoustic project, his response was:

Um…as a matter of fact, that’s some of the plans, of the style of music that I’m working on right now.

I don’t know what it’ll turn into. Some of it will be with Jonathan Davis, I think. Because he has plans of doing something similar as well. Something that might even cross over the boundaries of being more Southern-sounding.

Manson also said as part of the Reddit session that he plans to work with Shooter Jennings in the future, and with Johnny Depp who has dipped his toes into country as a Willie Nelson surprise guitar player. Manson also said he might soon go on a tour that would resemble “…a little bit more along the lines of church tent revivals. So everybody, be prepared for that. Some Deep South old time religion-style.”

We still have to see exactly what shape this upcoming “country” project or projects take, but once again it appears that 2015 is the year for the aging rocker to try their hand at honky tonk.