Martina McBride Does What She Wants with “Everlasting” 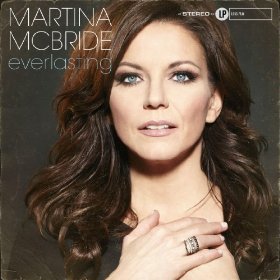 With Martina McBride at the crossroads that every big country music superstar knows they must ultimately face at some point in their career, where their radio relevancy is slipping through their fingers and the industry is slowly relegating them to the ranks of legacy acts, Martina does something very, very curious: she releases an album solely consisting of soul and R&B standards.

It was only a few years ago when Martina McBride was one the names on the list of nominees for the ACM and CMA Female Vocalist of the Year on a perennial basis. When her name slipped from those lists, that is when we entered this almost comical round-robin era we’re currently in, exemplified by shoehorning names into that fifth spot like Kelly Clarkson who isn’t country, Sheryl Crow who just recently turned country, and Kacey Musgraves before she even had released her first major album. After winning the CMA Female Vocalist three consecutive years between 2002 and 2004, if they could in any way justify McBride’s name being on a nominations list, it would be. Hell, it seems like just yesterday she was performing her big sentimental Cancer hit “I’m Gonna Love You Through It” on the CMA Awards. Now she seems like refugee of the country music industry.

This isn’t the first time Martina has done an album of standards. 2005’s Timeless featured McBride performing 18 classic country songs. Martina’s last album, 2011’s Eleven was championed by the Scott Borchetta imprint Republic Nashville. Borchetta has made a mint picking off aging talent from other labels, including Tim McGraw and Reba McEntire, Trisha Yearwood, and Rascal Flatts. However Everlasting was released through Kobalt Music Services, which by looking at their roster, specializes in being a safety net for aging talent and boasts about allowing artists to retain their rights. That’s all well and good, but it leaves Martina without the mainstream industry she’s enjoyed for nearly 20 years. Martina’s name still held enough strength to see Everlasting debut at #1 on the country charts, but with only an anemic 21,000 albums sold. I remember when Toby Keith once won the dubious distinction of having the lowest-selling #1 ever when his 2010 offering Bullets In The Gun sold 71,000 copies. My, how the times have changed.

Country music needs Martina McBride—or at least it did need her. With the showing of women in country in nothing short of a crisis, and Martina still possessing one of the most powerful female voices the genre has ever witnessed, it would have been nice for her first album in three years to be a retrenching; to bring some worthy singles to the table to at least challenge country radio’s male-dominated oligarchy to consider them. You can’t fault Martina for doing what she wants to do, though. Pardon me for mentioning a lady’s age, but she’s 47-years-old now and has been playing the game for many years. If Everlasting is the album she wanted to make, then that’s all the justification anyone should need. “You have to follow your instinct and your creative voice, and my creative voice was saying, ‘This is what you need to do at this time,'” Martina says. Though it may have been nice to see Martina challenge country’s ageism and sexism with a serious country offering, it just wasn’t in the cards.

What was in the cards was recruiting noteworthy producer Don Was, and working through a fairly recognizable list of Motown-style hits, including “If You Don’t Know Me By Now”, “What Becomes of the Brokenhearted”, and Van Morrison’s much-covered “Wild Night”. What’s there to hate about these songs? Not much. Don Was brings in horn sections to bolster the recordings, and Martina of course nails every damn performance. The record is very cohesive, made to listen to from cover to cover. But they played it very safe here with these songs; very down-the-middle. No risks were taken, no “interpretations” or true liberties were made with the songs. They’re simply Martina’s versions.

There’s a lot of reasons one could find to hate on this album. Why did Martina abandon country? I’m not sure she has for more than just this album, so this may not be a fair accusation to make. Why did Martina not put out an album of original music? Maybe because she’s finally free to do what she wants, and she didn’t want to. Why couldn’t she at least given these songs some sort of a country twist? That’s a good question, but she may have wanted to stay within the original spirit of the compositions.

On paper, I wanted to take this album and Frisbee it across the room. No offense to Martina, but there’s just very little useful purpose for an album like this in regards to championing the cause of music. But listening to it, I surprisingly didn’t want to immediately turn it off. It was well done, for what it is, and Martina McBride can still sing.