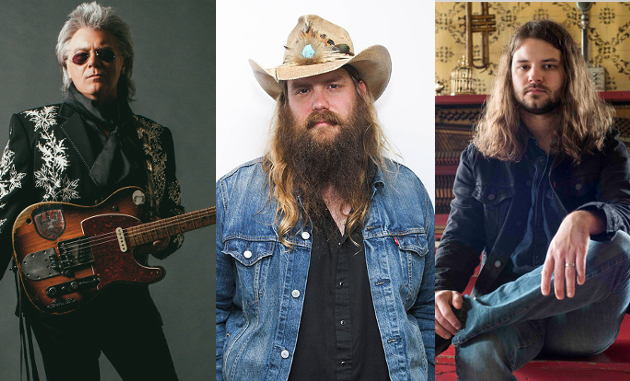 Chris Stapleton just won three Grammy Awards, including Best Country Album, Best Country Song for “Broken Halos,” and Best Country Solo Performance for “Either Way,” blew the doors off of many with a pair of marquee performances on Saturday Night Live with Sturgill Simpson, and now he’s celebrating by releasing a bunch of new tour dates with a couple of really cool openers in tow.

Chris Stapleton’s “All American Road Show” tour has just released an additional 36 dates, taking the Kentucky singer and songwriter all across the United States. That’s on top of already-announced shows such as an appearance at the Houston Rodeo, the MGM Grand with Nikki Lane, and a slew of festival dates.

Along for the ride will be Brent Cobb, who received his own Grammy distinction by being nominated for Best Americana Album for his record Shine On Rainy Day, and Marty Stuart and the Fabulous Superlatives, whose latest album Way Out West was also considered a favorite by many in 2017. Booking Marty Stuart and Brent Cobb for the tour also shows Stapleton’s loyalty to the roots of country and songwriting, despite some calling into question his credibility among so much success.

Chris Stapleton continues to set records and defy expectations, with his music already receiving a sizable boost from the Grammy Awards and SNL appearance. Many fans are also wondering if he may show up on stage for next Sunday’s Super Bowl when pal Justin Timberlake performs at halftime.

Tickets will go on sale to the gen pop February 8th. If you’ve got some backdoor via a fan club or credit card scheme, now’s the time to act because many of these dates will sell out.