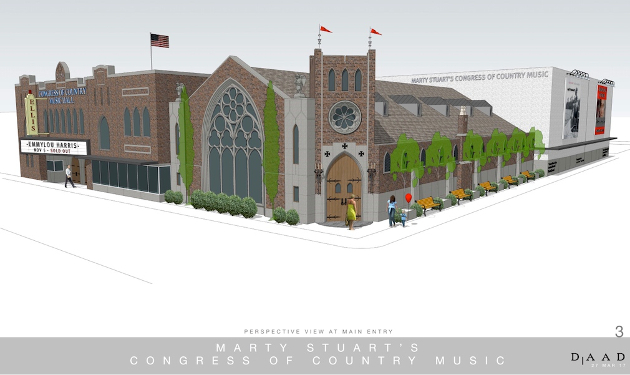 Marty Stuart’s long-planned Congress of Country Music complex in his birthplace of Philadelphia, Mississippi is moving forward once again with an expanded plan for a permanent home for the over 20,000 country music artifacts in Stuart’s personal collection. First reported by Saving Country Music in 2014, the original plan was to house the museum, event space, and education center in a historic Coca-Cola bottling building in downtown Philadelphia. Now Marty has his sights set on the historic Ellis Theater in downtown Philadelphia to help house the public space for the facility.

On Wednesday morning (1-31), Marty Stuart and His Fabulous Superlatives hand delivered new artist renderings of the planned project to the Mississippi State Capitol, accompanied by a press conference and a performance. Plans are for a museum, event space, and the “Marty Stuart Center” where attendees can learn about the country music business.

“There could not be a more meaningful location for the Congress of Country Music than downtown Philadelphia,” Stuart said at the press conference. “Congress means ‘gathering place,’ and that is exactly what we intend to create here. The Congress will be a beacon to country music fans, history lovers and all those invested in the future of American music. I began collecting as part of a crusade to save and carry forward country music culture. It was a job worth undertaking because it touched my heart. It is my hope that all who come to the Congress of Country Music will be moved by these artifacts.”

Stuart was first inspired to begin collecting and preserving country music artifacts when he visited Hard Rock in London while on tour in Johnny Cash’s band. Seeing all of the rock and roll memorabilia on the walls made Stuart wonder why similar places didn’t exist for country music. Back in Nashville as the old guard was being sifted out in the 80’s, so many of the stage clothes and personal items of country royalty were being thrown away in dumpsters, and sold at second hand stores. Stuart began rescuing and buying up everything he could find. His personal collection is only rivaled by the Country Music Hall of Fame itself, and Stuart regularly donates items to the Hall of Fame’s exhibits.

The Congress of Country Music is already endorsed by the Grammy Museum, the Smithsonian National Museum of American History, and the Library of Congress. But it still needs additional funding to move forward. That was one of the reasons for the press conference and performance on Wednesday, to help spread awareness of the project. “Right now the next step is moving forward in securing funding,” says Kathleen Brandau, a content strategist with The Cirlot Agency Inc.

But there is precedent for funding to be made available, and some money has already been donated. In 2013, a $1 million grant for the project was secured from the State of Mississippi, and an additional $500,000 worth of funds was approved in 2014 to refurbish the old Coca-Cola building. Plans are to use that building as a warehouse, while the Ellis Theater facing prime street frontage would act as the public entrance, along with other adjacent buildings being used as part of the project. Private donations have also been secured, including the first from rock and roll icon Steve Miller, who donated to the project unsolicited.

Owens Economics, LLC estimates that the facility would attract between 28,000 and 49,000 visitors annually.