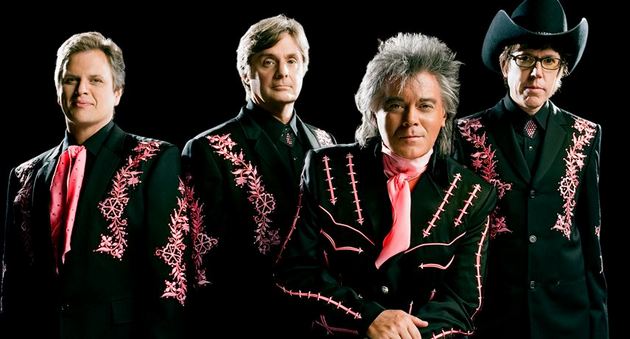 I don’t know how Marty Stuart does it. He’s like Gandalf on the back of his white steed, galloping here and there and everywhere in his pursuit to save country music. He’s scouring the country to secure important country music artifacts for preservation. He’s opening a cultural center in his hometown. He’s starring in The Marty Stuart Show and touring constantly. And here he is releasing a double album through his Superlatone record label.

Saturday Night / Sunday Morning unfolds just like its title implies. The first album is the secular country music fare you’ve come used to hearing from Marty Stuart with his mainstay backing band of recent years The Fabulous Superlatives, where the telecasters are loud and twangy, and the style is honky tonk and traditional. Then the second album unfolds very much like you would expect if you’ve heard Marty Stuart and the Superlatives perform their version of rocking country Gospel and a cappella compositions with their captivating four-part harmonies. It’s Gospel, but it’s Marty Stuart Gospel. It’s electric, with a vitality and energy not always heard in the discipline.

Like his mentor Johnny Cash, as Marty Stuart has grown older, he’s evidenced an increasingly deeper appreciation for Gospel music. Most any Marty Stuart album is going to boast a Gospel song or two, but with this release he takes the time to make an entire album of religiously-inspired music. Marty actually released another Gospel album called The Gospel Music of Marty Stuart somewhat quietly in April that includes live performances of many recognizable Gospel songs regularly performed on The Marty Stuart Show. But Saturday Night / Sunday Morning is Stuart putting his personal stamp on Gospel, and making sure to serve both sides of his fan base by not just including Gospel songs exclusively.

If you think about it, this strategy is pretty smart. Unfortunately, some listeners are turned off when they hear an album is only going to include religious material. You combine two albums together, and you can lead right into it since folks are already listening. It’s like your mother giving you sugar with the medicine. Next thing you know, you’re appreciating the Gospel music just as much as Marty’s other stuff, if not more. 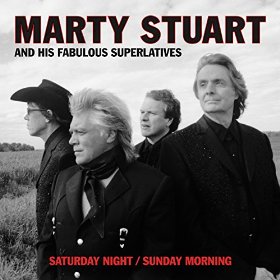 Saturday Night / Sunday Morning should not be considered a concept album. There’s no deep-seated story with recurring characters or themes referenced throughout like Marty’s landmark concept album The Pilgrim from 1999. The two albums are more just a style and approach delineation, though like all of Marty’s music, there are still important themes and messages to heed, hard lessons learned, harrowing stories, and personal awakenings to be had amongst these 23 new tracks.

Marty gives us a lot of music to crunch through in this release, and a lot of notable appearances. Included on Saturday Night / Sunday Morning beyond the Fabulous Superlatives is Hall of Famer Hargus “Pig” Robbins on piano, who makes appearances throughout the Saturday Night album. Both Hargus and and Willie Nelson’s long-time harmonica player Mickey Raphael pretty much carry the second song “Geraldine.” The great Mavis Staples makes an important appearance to begin the Sunday Morning portion of the release, lending her vocal talents to the classic “Uncloudy Day.” And Evelyn Hubbard also shows up on the Gospel album. Who is Evelyn Hubbard you ask? Well she’s a pastor at the Commerce Missionary Baptist Church in Robinsonville, Mississippi of course.

Saturday Night / Sunday Morning begins with Marty Stuart reviving the sound that has graced his records since enlisting the Superlatives as his backing band. Though people talk about the great guitar-slinging frontmen of country music today like Brad Paisley and Keith Urban, the combination of Marty Stuart and “Cousin” Kenny Vaughan makes for about the best Telecaster-based country music you can find these days, and based not just off of technique, but off of tone and taste. Since Saturday Night is chased by Gospel, Marty and the boys put the pedal down on the first album and rarely let off. Think of old school honky tonk country rock.

The middle of this album gets just a little bit sleepy. There’s a decent amount of covers on this record, and in stretches you feel like Marty is doing a little too much interpreting of old song styles than offering more original-sounding material like on recent albums. But there’s not a slouch anywhere on this track list either.

Sunday Morning continuously builds toward the end of the album, to where the brilliant four part harmonies of Marty, “Cousin” Kenny, “Handsome” Harry Stinson, and “Apostle” Paul Martin unfold into some brilliant, and spine-tingling works of inspirational music. For years the foursome has been performing one of the best renditions of “Angels Rock Me To Sleep” ever bestowed to human ears, and we finally get a recorded version of this masterpiece. And the album resolves in the mostly-a cappella original “Heaven” that is so haunting and touching, it should be considered one of the essential recordings of Marty Stuart’s entire career.

Once again Marty Stuart and the Fabulous Superlatives prove they are at the core of keeping the traditions of country music alive, while doing so in a manner that is energetic, inviting, informed, and broad-based where people of all stripes—the Saturday night and Sunday morning people—can come together and enjoy the gift of good country music together.