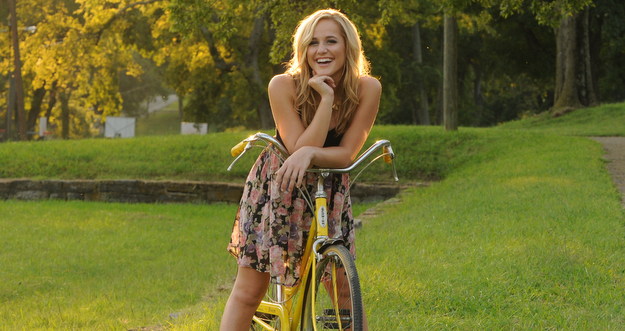 Close your eyes for a second, and envision a world where a young beautiful bubbly female star—like Taylor Swift maybe—releases a completely traditional country album, not of her own music, but of some of the standards from country music’s sainted past, and not just by herself, but as duets with the very stars that made the songs popular in the first place; the same stars who are very much being forgotten in modern country’s obsession with youth. Think of the possibility of how this could open up an entire new world of music to listeners who are too young to remember where country music came from, ostensibly bridging the future and the past.

Now, open your eyes back up, and you’re ready to enter the world of Mary Sarah.

Musicians, just like the rest of us, tend to fall within a dozen or so archetypes, with minor variations on those themes when considering the specific artist. You have the scrappy up-and-comer looking to make their name, the established journeyman, the superstar, the underground anti-hero, and so forth and so on from there. Even the most unusual musicians tend to still follow the same weird path of their unusual predecessors. But I have never happened upon a performer that is so hard to pin down, so hard to wrap your head around and really deduce exactly what’s going on as Mary Sarah, and specifically her duets album called Bridges performed with an incredible list of country legends including Willie Nelson, Merle Haggard, Dolly Parton, Vice Gill, Freddy Powers, and Lynn Anderson.

It’s not that Mary Sarah is “weird”. She’s far from it. In fact if anything, just how un-wierd Mary Sarah is makes this entire case study that much more confounding, and speaks to just how much of a unique individual she is. The 19-year-old singer, born in Oklahoma, raised around Houston, currently living in Nashville, has the looks and disposition of a bona fide American superstar. Nearly every picture you see of her, she’s smiling. And when she’s frowning, it’s to be cute. She’s happy, well-adjusted, confident, illuminated. She’s almost too perfect in some respects, like you want to take some dirt and rub it on her just to make her more real. It’s hard to tell if there’s anything dark lurking behind that perfect hair and haloed smile. 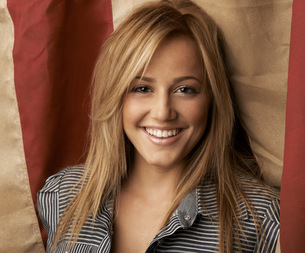 If you want to be a step ahead of the game in the music business, it’s best to keep one eye on artists coming out of adolescent development, and that’s where we first spied the young Mary Sarah. Like so many young country stars these days, Mary Sarah came out of the vocal coach ranks, and the stage show environments like Kidz Bop that look to begin developing stars at a very young age. This isn’t the “picked up guitar in college to play at coffee shops for tips” model, this is the fast-track, preordained conveyor belt to stardom.

It’s about this time in the story that many independent and traditional country fans start to get turned off by how the biography of this young artist is playing out, and where it probably will lead. Yes, the cute little girl groomed for stardom since childhood becomes country music’s next manufactured star; we’ve seen this act before and it doesn’t result in anything we’d be interested in listening to or seeing. And it’s at that moment when Mary Sarah completely surprises you.

Along with participating in things like Kidz Bop, Mary Sarah was also touring around Texas as a young teen, playing churches and the little Opry houses around Texas that are nestled in the forgotten spaces of rural America where the sound of traditional country still thrives. It was a tale of two worlds for the young singer, and in 2010 she released an album called Crazy Good. It was like early Taylor Swift, with songs about boys and young adolescent struggles, but with steel guitar and banjo, illustrating the double world that lent to Mary Sarah’s influences.

The first song off of Mary Sarah’s new album Bridges that hit our ears was a duet with the late great Ray Price on his old standard “Heartaches By The Number”. It was released very shortly after Ray Price had passed away, and it was one of the very last recordings Ray Price ever made. Here is Mary Sarah with her perfect skin and a glittering personality, rubbing elbows with a legend like Ray Price. What was going on here? And then you gave it a listen, and were blown away. First off, Ray sounded incredible, so strong and lucid and inspired in his performance. And Mary Sarah, her voice was not only big, powerful, and confident, it had that distinctness to it, just a little pinch of something that you’ve never heard before that is the mark of all singers that are not just technically good, but have a talent that is lasting.

Then looking deeper into this Bridges album and seeing that the young singer had worked with Dolly Parton, Willie Nelson, Merle Haggard, Tanya Tucker, and the Oak Ridge Boys, even Freddy Powers, clearly something much deeper, much more complex was going on here than a fast track to pop stardom. 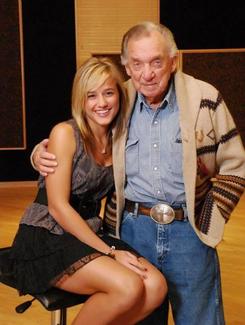 Whatever was going on, it still had tremendous money and management pull behind it. It still had that “fast track to stardom” feel. Billboards have been erected in Nashville promoting this album. The recordings are of the highest quality, and include some of the best and legendary country music talent still living. And as for the concept, it’s hard to argue that it is anything but brilliant. But the cynic in me begins to wonder about the motivations. Why would a young girl like this with such a powerful, undeniable voice and right on the verge of stardom take this certainly cool, but highly unusual route? Maybe back in the history of country music, I’m talking the 70’s or even before, artists wanting to make a name for themselves and get started in the business would make an album like this. But in 2014? It seems like such a strange approach, though still sort of genius.

And the results, especially when you narrow your focus down to some of the specific duets, can’t be argued with. The Ray Price duet already received SCM’s top grade. The duet with Dolly Parton on “Jolene” is something other-worldly, and may be one of the very top performances of this iconic song ever cut. Nobody is a harder duet partner than Willie Nelson because he insists on singing in unintuitive pentameters, but the production of Mary Sarah’s “Crazy” duet allowed both singers the space to breathe and do their thing, yet still conveyed the intimacy of a classic duet. 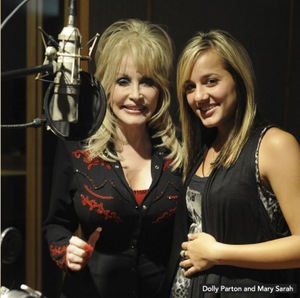 And meanwhile, musicianship seems to be no obstacle on this album, as an army of A-listers make their way into the studio to lay down some of the slickest recordings of classic country music you can find. “Go Rest High On A Mountain” with Vice Gill starts off sparse, and then positively soars. Some of the song choices and duet partners coming from such a young girl are most curious, but also cool. Who would have thought for the Merle Haggard duet “The Fightin’ Side of Me” would be chosen over something like “Silver Wings”? But the decision shows guts and spirit. Freddy Powers may be the least-recognizable name on the track list, but his inclusion here and his role as a mentor to Mary Sarah gives her and this project a country music street cred it otherwise wouldn’t carry, while the Tanya Tucker and Lynn Anderson duets on “Texas (When I Die)” and “Rose Garden” respectively give this album it’s fun moments.

As great as the great songs are on this album, the misses miss pretty bad. It’s not that the performances aren’t spot on, but the curse was cast in the song selection. “What A Difference You’ve Made in My Life” with Ronnie Milsap is incredibly shag carpet and saccharine, almost like a song that would play when the credits of an 80’s after school special are rolling. The “Dream On” effort with the Oak Ridge Boys comes across as dated, despite the flawless presentation. And “Where The Boys Are”? The composition actually fits Mary Sarah’s voice perfectly, but once again stuck out as a strange song choice. To 60-year-old ears though, these songs may sound quite fitting and nostalgic. 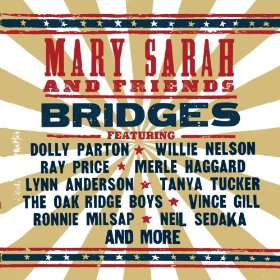 Overall, this is an album of individual songs and performances, whose selections should be looked at individually because of the disparity of the material, and the different duet partners. Traditional and classic country fans will love most songs, some will hate others, but the count of good to not good definitely ends up in Mary Sarah’s favor.

I still have absolutely no idea what’s going on here, and in some respects, I don’t want to know. And one thing this album doesn’t highlight is that Mary Sarah also has songwriting as one of her strong suits. Mary Sarah could develop into the Taylor Swift of traditional country, bringing huge crowds back towards country’s classic sound. Or she could develop into the next Taylor Swift, period, and maturate into a pure pop performer. Or it could be something in between, or completely unique that country music has never seen before and can’t compare to anything else. Is this album simply a way for Mary Sarah to pay her penance to the traditional country music powers that be so that she can run off and play pop? Or does it speak to a sincere desire to create a career behind “bridging” the old and the young, the classic and the contemporary? Time will tell, but I ‘m telling you, with a voice like this, and a spirit behind it that is so unique, it’s probably imperative on all of us to be paying close attention.