Mashup Illustrates How Many Country Hits Are The Same 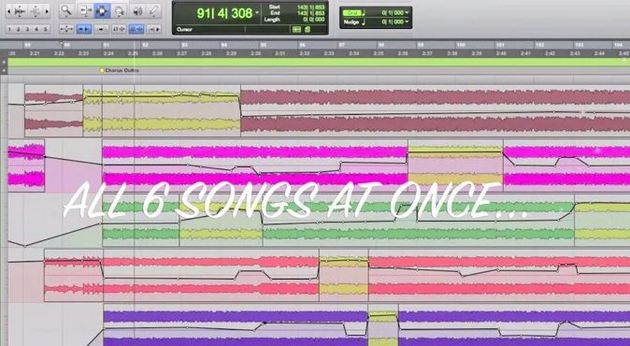 We complain all the time about how today’s popular country music pretty much all sounds the same, but is this really true from a technical standpoint? That is what one enterprising Audiophile and songwriter set out to illustrate by making a mashup of some of Bro-Country’s biggest singles over the last couple of years in a pretty mind-blowing and revealing video.

Posted under the YouTube username “Sir Mashalot,” the mashup takes six songs—“Sure Be Cool If You Did” by Blake Shelton, “Drunk on You” by Luke Bryan, “Chillin’ It” from Cole Swindell, “Close Your Eyes”by Parmalee, “This is How We Roll” from Florida Georgia Line, and “Ready, Set, Roll” by Chase Rice—and laid them all parallel into a Pro Tools sound file, changing the tempo and pitch slightly in some cases until they all ran at the same speed, and then pushing play. The six songs represent four #1 Bro-Country hits from 2012 until now, a #5 hit in “Ready, Set, Roll,” and a #11 song in Parmalee’s “Close Your Eyes.”

The video starts by selectively moving through parts and pieces of each song to illustrate the stark similarities in beat, melody and lyrical content, and then ends with all the songs running simultaneously together virtually seamlessly.

“My inspiration started when I heard Parmalee’s ‘Close Your Eyes’ several months ago,” says Sir Mashalot, aka Greg Todd who’s real life pursuit is as a Nashville songwriter. “During the chorus, I started realizing it had an almost identical melody/music bed as Blake Shelton’s ‘Sure Be Cool If You Did.’ So I imported them into Pro Tools, tweaked the key and tempo to line them up, and wahlah- turned out they really were the same song! So I overlapped them together and sent it out to a few friends, thinking it was an interesting exercise.”

“Then, while driving in my car over the next couple of weeks, I started hearing one song after another which I was certain would fit perfectly into the original mashup,” Sir Mashalot continues. “First ‘Chillin’ It,’ then ‘Drunk On You,’ then ‘This is How We Roll,’ and finally ‘Ready, Set, Roll.’ Each time I heard one, I would race home to plug it into the original pro tools session and yep, another perfect fit. Originally, I had all 6 songs overlapping, start to finish, but the more I listened to the lyrics, the more it occurred to me that it wasn’t just the music and melody that flowed together, but the actual lyrical content. So I presented myself with the challenge to create a singular, coherent story line using different snippets from the 6 songs. It took me about 2 weeks for that part of it. If I’m being honest, I think it still has tons of flaws (including some choppiness throughout), but my computer fried and so I finally just decided to get it out there the way it stands now.”

So there you go, it’s one big Bro-Country mega song all mashed up together. And apparently Sir Mashalot isn’t done just yet. “I am currently writing a song that will fit in as the 7th song of the mashup. I figure, hey- at least the gate keepers won’t be able to say it can’t be a hit!”

Who knows, if someone released this to radio, it might be a huge success.