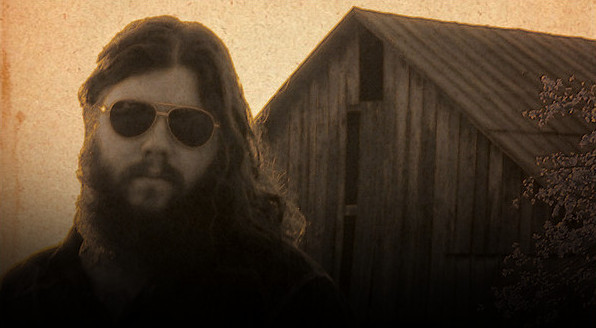 Back in October of 2013, Knoxville, Tennessee’s Matt Woods came out of the wild blue yonder and blew us all away when he released a single and video for what has since become his landmark song “Deadman’s Blues”. Few have ever landed such an emotional wallop to the gut like Matt Woods did with that one offering. It went on to be named Saving Country Music’s Song of the Year in 2013, and received similar praise from other attentive periodicals.

Matt Woods did what every songwriter yearns to do whenever they put pen to paper: make a deep, emotional connection with the rest of the world. But “Deadman’s Blues” was just one song. Would he, could he match it? After “Deadman’s Blues”, I almost didn’t want to know. I hate to admit it, but even though Matt Woods had been a productive artist and released multiple albums before the 3-song vinyl that “Deadman’s Blues” was a part of, I’d never partaken in his music any deeper. And for me, it seemed better to allow that song and Matt Woods to loom large for as long as possible, and not risk eroding the magic of “Deadman’s Blues” by discovering diminishing returns from rifling through his back catalog, whether that would have been the result or not. The song and video have been such a handy go-to when looking for a douse of inspiration in the middle of a given day, no sense in testing fate. So I’d wait for a more deeper Matt Woods exploration once his new album hit with “Deadman’s Blues” as the anchor.

And while we’re exercising full disclosure, I was honestly a little concerned that maybe Matt Woods wouldn’t resonate beyond the one song. I thought he may not be country enough for some reason. Matt Woods has a lot of Austin Lucas and Two Cow Garage in him—two excellent outfits, but two that trend more rock, with country and roots mixed in. And like Lucas and Two Cow, Woods works in realism more so than poetry, wrenching at your heart with real-life stories that subordinate subtly and symbolism. Would a deeper listen to Matt Woods reveal a style that was emotionally-driven roots rock with steel guitar dubbed over that I could only partially get behind? 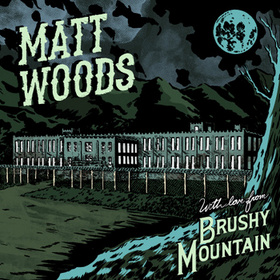 And that brings us to the matter of his brand new album With Love From Brushy Mountain. It only took two songs in to show how silly my concerns were that this would not be country enough, and the entire album worked to reveal that when it comes to Matt Woods and “Deadman’s Blues”, that’s just the tip of the iceberg.

Brushy Mountain is as complete of a country album as you will find, with excellent songwriting throughout, a great sound that is country at heart, but with sprouts of rock & roll that endow the project with spice and originality, and there’s something for every mood here. In other words, it lived up to the expectations of “Deadman’s Blues”, and even adds a few more exceptional song offerings that downright rival that song’s indelible impact.

The album starts off with two waltz beat songs, including the superbly-written “West Texas Wind” which talks about contracting rambling fever from classic old songs and living it down the rest of your life. “Snack Bar Mary and the Tin Pin Priest” shows off Matt’s storytelling side, and his ability to evoke setting in his songs. “Drinking To Forget” is more of the classic country drinking song, while another waltz, “Tiny Anchors” will creep up on you as one of the albums best tracks after seeming a little too simple during the first few listens. “Real Hard Times” is the album’s fun song, taking a up-tempo, swing approach.

I know what you’re thinking though: none of this fare sounds like something that would rival “Deadman’s Blues”. The music on With Love From Brushy Mountain is arranged strongly throughout, and some female harmony vocals really take this album to the next level as far as instrumentation and production. But what really sets Matt Woods apart—what allowed “Deadman’s Blues” to resonate so deeply—is Matt’s ability to inebriate his vocals with such authentic emotion, yet deliver them with such conviction and effortlessness. He conjures up these moments where he’s downright screaming, with the bare patches on the top of his cheeks blistering red, and his huge beard and long hair shaking frantically, stricken by the same emotion that inspired the song. It’s terrible and beautiful all at the same time, and the commiseration he can churn in the listener during these moments is virtually unparalleled.

The last three songs of this album, “Lucero Song”, “Liberty Bell”, and the “bonus” track “80 Miles An Hour” feature these definable Matt Woods moments, as well as the same heart-wrenching songwriting “Deadman’s Blues” achieved. You could even calls these songs sequels or segues to “Deadman’s”, like the memorable narrative lives on through these final tracks.

So that solves that: Matt Woods is no fluke, no one trick pony. Not even close. He’s a force of songwriting nature who can match his stories with inspired performances.

Purchase With Love From Brushy Mountain From Matt Woods

Purchase With Love From Brushy Mountain on Bandcamp