Trigger Down with Pop Country 78 Comments 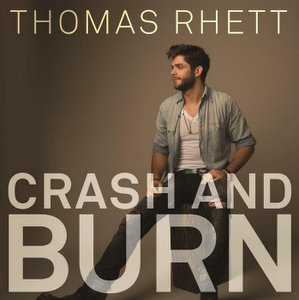 Like Mephistopheles himself gorged on a diet of the most grotesquely valueless souls, and then 36 hours of insidious churning in the innermost bowels of hell amidst unholy gastric juices eventually putrefied a malevolent impaction to be shot out of the Satanic anus like a worm-riddled disease baby, Thomas Rhett has unleashed a new single on the planet called “Crash and Burn.”

May the ghost of the great Sam Cooke kick Thomas Rhett’s ass eternally for ripping off the iconic rhythm and cadence from the classic American standard “Chain Gang” in such an open and arrogant manner that even a villainous bystander like Vanilla Ice would give this the hairy eyeball. “Evolution” in today’s country music is simply a code word for filching something from another genre as the result of the relative vacuum of new ideas in the country medium, and Thomas Rhett and producers Dann Huff and Jesse Frasure left so much of their DNA over the crime scene of this caper it would make a rape kit envious of the swabable masses lingering behind this messy and haphazard ruse. Someone rustle up the bulldog legal team for Marvin Gaye and get them under retainer for the Sam Cooke estate post haste.

Thomas Rhett’s “Crash and Burn” is offensively cheery for what is supposed to be a sad song, and belligerently non-country in a manner that makes one question if the country genre even exists anymore if something this acid scrubbed and painstakingly sanitized of any and all traces of country influences could still make it onto country radio. Yeah I know there’s worse, and the retro feel of the song almost makes you want to hum along, but this is how the slow desensitization from these non country songs has masked the fact that there’s now music that belongs more appropriately in virtually every other genre of music except country scoring #1 hits on the country charts.

They’ve been trying to make a superstar out of the marginally-talented Thomas Rhett for so many years now that Rhett has decided to swallow any and all pride and simply become the silly putty star for his label and producers to mold him into whatever they wish. Focus group data attests that this R&B/disco/EDM bullshit is hot right now so just start releasing Motown rehashes with disco influences as country singles while the rest of the industry sits idly by and witnesses these audio felonies transpire with sealed lips. The country genre hates everything country right now, and covets the influences of every other genre than its own.

Even Rhett himself has been launching preemptive strikes in the press, knowing this song would be ridiculed. “I would be lying if I told you I wasn’t extremely nervous about what the feedback was going to be,” Thomas told Rolling Stone Country. Gee I wonder if he ever dreamed it would be compared to a bowel movement from the angel of darkness? Thomas knows deep down in his heart that this music isn’t country because unlike some of his peers such as Florida Georgia Line, Rhett has country pedigree. But that hasn’t stopped him from releasing “Crash and Burn,” and let’s not act like it’s some significant departure from his last single “Make Me Wanna.” Rhett doesn’t give a lick what his music sounds like, only that he can make his Ranger Rover payments.

And once again we look in the fine print of an unfortunate release and there’s Chris Stapleton’s name along with Jesse Frasure being given credit as songwriters. Stapleton’s solo work sure sounds good, but he’s got a hell of a lot of atoning to do, and sure makes it hard to hitch yourself to his bandwagon even though the words to “Crash and Burn” aren’t especially terrible, they’re just aggressively insignificant.

“Disco country” is what “Crash and Burn” is being labeled by some. Where are the gatekeepers? Are they too busy getting swept up in the disco vibe of this song to see they’re undercutting the very foundations of what makes country different from the rest of the music industry? Were no lessons learned from disco’s sugar rush career arc back in the 70’s to where it’s now not only rehabilitated from being the laughing stock of American genres crowning the trash heap of history, but it is being regurgitated like last night’s late evening burrito on a hot sidewalk after a drunken next day stupor home to terrorize passers by from its putrid emanations?

Bro-Country’s short life span, eat your heart out. Barry Gibb has written better country songs than all the new generation of country stars combined, and that’s not hyperbole. And Jerry Reed, Larry Jon Wilson, and many more were employing R&B influences in country with much better results way before Thomas Rhett was even a gleam in Rhett Atkins’ eye, so save your diatribes about “evolution” and “innovation.”

Sam Hunt is cackling, a second-tier country opening act in Thomas Rhett has virtually more number ones than all of the women in country music do in the last half decade combined, and now disco has emerged as a relevant influence once again, and in of all places, the genre that’s supposed to be its polar opposite. We can only now hope that the four horsemen of the Apocalypse will storm out of the sky to cleanse away this hell on earth. Hell, since they’re on horses, at least they would resemble something even remotely country. The soundtrack to the true end of days would be audio relief compared to this.