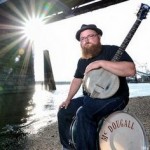 Few artists can articulate the important and poignant message of resetting priorities in life, and do it in such an enthralling manner as Scott McDougall. The Oregon-based One Man Band is set to release his sixth album A Few Towns More on April 10th, and promises to continue to carry his fans vicariously with him as he journeys across the country, making friends and compiling stories, and being a shining example of living life for life’s sake.

The theme of A Few More Towns is encapsulated in this line from the title track and final song of the album: “The road you chose might take you back to your front door, but it looks like mine’s gonna take me on a few towns more.”

“It’s a song that portrays how lonely and yet totally amazing it can be touring alone,” explains McDougall. “The loneliness you face sometimes is all worth it as you spend each night sharing songs with people and making friends out of strangers… As with all of my albums, there is an underlying message of hope. This one also deals with the responsibility each one of us has to take what we learn in life and share it with others, to find that place where we know we belong and can do the most good.” 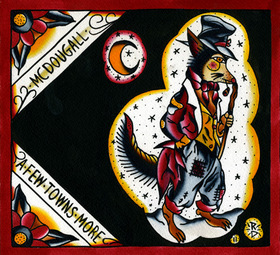 Like all of McDougall’s albums, it will include a healthy mix of old-time country tunes, folk and blues, and instrumentals. And though he’s considered a One Man Band, there’s a little help from his friends here and there, like on “Gates of Victory” where a vocal chorus is filled out by his Portland-area musician friends. And when looking at the track list, you wonder if fellow wandering souls and songwriters Willy “Tea” Taylor and Tom VandenAvond helped inspire “Cuttin’ The Grass / Tom & Willy Go To Town” though neither appear on the instrumental track.

A Few Townes More was recorded in a barn during the throes of the cold Washington winter, so cold in fact sometimes it was hard for McDougall to play his banjo. “I dig that when listening to [the album] you sometimes forget that most of it is one guy. I try hard to find a balance between getting creative in the production realm and trying to produce something that can be repeated live with the same intensity. I think we found a good balance on this record.”

The album artwork for A Few Towns More is supplied by Modesto-based folk-singer/tattoo artist Roy Dean.

McDougall will be appearing at both The Muddy Roots Festival and Farmageddon Fest this summer, and will be touring nationally throughout the year.