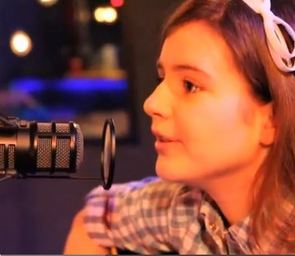 It isn’t like the 15-year-old singer-songwriter Melody Williamson and her family band Williamson Branch weren’t worthy of our attention before she released her home-spun video “There’s No Country Here” that would soon go viral, be picked up by multiple news outlets including The Huffington Post, and has now been viewed over 180,000 times (and counting) on YouTube, and 200,000+ on the original Facebook video. But because of the glutted nature of the music landscape these days, sometimes it takes something special to capture our attention and make us stop down and really think about what we’re listening to.

In part, it was the lo-fi nature of the video, Melody’s proclamation at the beginning of the song that it “…truly comes from the bottom of my heart” and that she wasn’t trying to make something to go viral, but something simple on her back porch to share, that made the song so resonant. Sure, country protest songs are a dime a dozen these days, but from a 15-year-old girl? It was one of those moments when it was our job as adults to stop down and pay attention to someone younger than us because in this upside down world, sometimes they are the ones that hold the purest wisdom.

Since releasing the initial video for “There’s No Country Here” in mid January, Melody has recorded a full studio version of the song that is now available for purchase, and she made a key change in the lyrics that make the song even better than the original version. She also recently stopped by the Big D & Bubba syndicated radio show to record a new live version of the song.

As I always say, it won’t be websites, organizations, or awards that will Save Country Music, it will be songs. And Melody Williamson proves why this is true once again with “There’s No Country Here”.