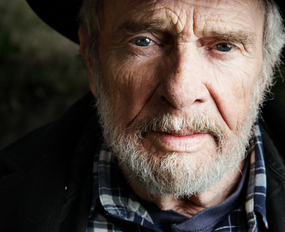 NOTE: This story has been updated (see below).

Merle Haggard was forced to cancel his show Tuesday night (2-2) at the Fox Performing Arts Center in Riverside, California last minute after he was too sick to take the stage. The show was a makeup date for a performance originally scheduled for December 3rd that Merle was forced to cancel with all of his December shows due to a double pneumonia. Merle also canceled shows on January 30th and 31st in New Mexico as he continued his recovery from his recent health concerns.

“Thank you to the fans who came out tonight in riverside! Sadly I’m just not strong enough yet,” Merle said on social media. He also posted a photo of a fan praying behind his bus after the canceled show. According to concert goers, Merle’s son and guitar player Ben Haggard came out on stage and played an opener, and then Merle’s fiddle player announced that Merle was too sick to take the stage.

Merle Haggard spent 11 days in the Eisenhower Medical Center, plus additional time in a recovery facility after being diagnosed with the double pneumonia in December. According to Merle, he nearly died from the illness. Merle credits Gene Autry’s widow Jackie for getting him to check himself into the hospital where the double pneumonia was diagnosed. He also says he lost a lot of weight due to the illness, and will appear differently on stage.

Merle has another show scheduled at the Saban Theatre in Beverley Hills with Kris Kristofferson for Wednesday (2-3), and another show on February 6th in Las Vegas.

UPDATE: Merle has now decided to cancel all of his remaining February tour dates. The publicist for Merle says he is “still feeling weak from his recent struggle with double pneumonia and has decided to seek further treatment.”