Merle Haggard Remembered on Floor of U.S. House of Representatives in Stirring Tribute 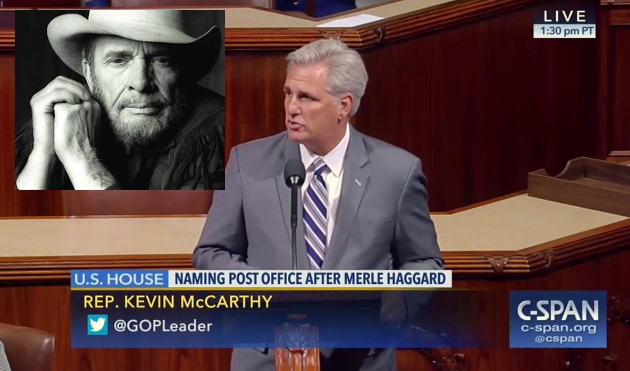 Amid all the turmoil and gridlock currently roiling in Washington D.C., there is one thing that the U.S. House of Representatives just agreed upon unanimously, and without debate. It was to honor the late and great country music legend Merle Haggard.

On Tuesday (7-11), the House of Representatives voted unanimously to name the Bakersfield post office located at 1730 18th St. after the California country legend. The bill was brought to the floor by Rep. Kevin McCarthy, who represents Bakersfield in California’s 23rd district, and is the current House Majority Leader. Merle Haggard passed away on April 6th, 2016.

The excuse was the christening of a post office in Haggard’s hometown of Bakersfield, California. But the underlying reason was to evoke the name and memory of an iconic figure in American culture in the seat of power, and in turn, pay tribute to all the working people that Merle Haggard represented so well in song.

Read and see Rep. Kevin McCarthy’s speech from the House of Representatives floor below.

Mr. Speaker, you can take a look back on American history. You can see figures standing tall who spoke for the everyday working man. Following a long tradition of Whitman and Twain, Merle Haggard was a man who knew America instinctively, because he lived an American life. It wasn’t a life for the movies, but it was all more compelling, because it was all more real. That is the reason they called him the poet of the common man.

Merle Haggard didn’t have it easy. At the height of the Depression, his family searched for opportunity out West. Merle grew up with the little means, and lived with the past mistakes and regrets. So he sang. He sang in “Branded Man” of the stigma of prison, crooning, “I held my head up high, determined I’d rise above the shame. He sang in “Working Man Blues” of the grind of doing his duty to his family. “Working as long as my two hands are fit to use.” And he sang of his roots. Not of power, or wealth, or of status. But of pride of being an Okie from Muskogee—a place of leather boots, football, and Old Glory.

He found success, and more importantly, redemption in the music he shared with his country. Now The Bakersfield Sound changed country music, and it’s a testament to Merle Haggard’s talent. When you listen to his hits, from “Branded Man,” to “Mama Tried,” to “Big City,” to “Working Man Blues,” or even to “Okie From Muskogee,” you not only hear the hardship and wisdom of a well-lived life, but you can hear the roots of so much of the music we still listen to today.

From a man who went from Bakersfield High to San Quentin Prison, to the Country Music Hall of Fame, a building doesn’t seem like much. But I hope when people pass by the Merle Haggard Post Office building in downtown Bakersfield, they will remember an icon of our community, and artist who never backed down, a man whose honesty above his own failings and willingness to pick himself back up inspired music that lifts our spirits, and feeds our souls.