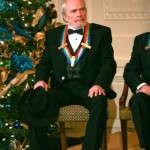 Please indulge me for a minute here because I need to blow off some steam. Yes I’m glad that The Kennedy Center honored Merle Haggard and I guess you should be grateful for what you are given and not look a gift horse in the mouth. But in my opinion, the Kennedy Center’s presentation to Merle was horrifically mild and uninspired.

I had to sit through presentations for theater nerds and dance freaks I’d never heard of to get to Merle’s, but after watching their presentations, I thought these dudes had hung the moon. The presentations were perfectly orchestrated, convincing, inspiring, touching to the human spirit and uplifting, even to someone with no idea who these people were. And almost every presentation built up to ‘that’ moment where a great human’s work was done justice by an outcry of gratitude. These are the Kennedy Center Honors; and the tributes have to be perfect, and they were!

And then we get to Merle.

The only thing perfect about his presentation was Miranda Lambert’s cleavage. His presentation felt abridged, unimaginative, and flat. Who in the hell was in charge of this, Vince Gill? And why now all of a sudden is Vince the default MC whenever country music needs a spokesman, because his optometrist has the perfect glasses frame for every occasion? Willie was the one bright spot. He looked healthy and was magnetic, but then here comes Kid Rock and his big bag of nothing, looking like a wet cigarette and throwing a dirty, greasy feeling over the whole thing. I swear I saw Sidney Poitier whisper to Angela Lansbury, “Oh shit, look what the cat dragged in.” Steven Tyler refused to use the microphone after Kid until it had been through an Autoclave, and then doubled up the scarves on the mic stand after dousing them in Lysol.

And did Jamey Johnson get high on Honeysuckle Rose before his performance, or is he working on adding the most elongated awkward pauses into his lyrical phrasing as humanly possible? Everybody but Willie looked completely lost and unrehearsed.  And why of all people did John Lithgow have an iso camera shot on him all night? Sure, 3rd Rock From The Sun is good for a few laughs, but he got more face time than Barack Obama. Seriously, if you TiVo’ed this and made a drinking game around every time they show him, you’d be arrested for running around your neighborhood naked and humping a fire hydrant.

I know I’m probably coming across as an ungrateful little bitch, but this is Merle Haggard dammit! Bring your A game! And it’s The Kennedy Center Honors; an excellent outreach opportunity for country music, and we looked like a bunch of monkeys trying to screw a football out there. Merle Haggard is an American treasure and deserves better.

Screw it, I’m writing my own presentation speech to Merle.

Two guns up for Merle Haggard and his Kennedy Center Honors! Two guns down for the presentation!

(PS: Autoclave–n. A strong, pressurized, steam-heated vessel, as for laboratory experiments, sterilization, or cooking. Sorry, when I get mad, I get wordy.)