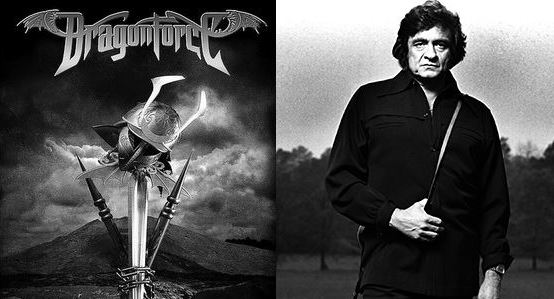 I don’t know if this is the most abominable thing I’ve ever heard, or the most epic, or the most accidentally comical. Either way, it is probably worth a listen.

The completely over-the-top Nintendo-inspired speed metal fantasy-driven über band DragonForce decided that for their upcoming album Maximum Overload out August 18th, they would cover none other than The Man in Black’s iconic country standard, “Ring of Fire”. And no, DragonForce is not “going country.” This is all about DragonForce bringing their insanely complex and super fast heavy metal sonic palette to Cash’s original composition.

Either Johnny Cash is rolling over in his grave so fast it’s registering on the Richter Scale, or the playing of this song will open up a portal of souls that will see all of country music’s legends come back to life in full body armor riding on the back of flying battle cats and armed with swords that shoot lasers to battle the forces of evil for the very fate of planet Earth for the next 10,000 years. Will this Johnny Cash cover convert scores of metal fans to the Man in Black? Maybe, but they’re apt to show up to Johnny Cash functions wearing shoulder pads with 14-inch spikes emanating from them and beating the shit out of each other with plastic battle axes. But hey, their money is green too I guess.

Guitarists Herman Li and Sam Totman formed DragonForce (originally called DragonHeart) in the United Kingdom in 1999. Much of their sound is inspired by the background music of 3rd generation video games, featuring high-register guitar peels and super fast tempos only thought to be playable by programed computer chips. DragonForce is somewhat polarizing in the metal world, seen as a gimmick by some, and lauded by others for their abilities. Appeal for their version of “Ring of Fire” will probably split down similar lines.

Sam Totman told the AV Club about the song selection,

We got tired of hearing bands play covers exactly the same as the original and we always thought Johnny Cash was pretty cool. So we were like, let see what happens if we speed him up to 220BPM and plaster it with shredding guitars and huge soaring vocals and choirs! Basically give him an EXTREME DragonForce overhaul! Some people gonna love it, some might hate it but you definitely never heard Johnny Cash like THIS!!!