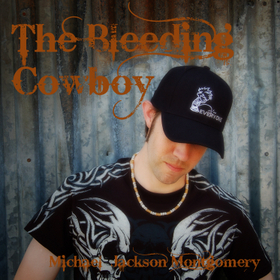 The pop country megastar that never was, but still may be someday named Michael Jackson Montgomery is finally releasing an album called The Bleeding Cowboy on April 9th.

Michael Jackson Montgomery and his daughter Natalie (just one name, like “Sting”) we’re signed to a major Nashville Music Row record label, and were reportedly going to be part of a music “mega franchise” that was going to include movies, a television show, national tours, as well as music projects. However at some point the still unnamed record label pulled the plug on the “mega-franchise” concept, leaving Michael Jackson Montgomery and his music high and dry. After a fierce legal battle by Montgomery to get the music released, it is finally going to see the light of day.

According to Michael Jackson Montgomery, the tracks on the upcoming album were cobbled together from various studio sessions, with some of the tracks being completely finished, and others just scratch tracks and studio outtakes. The material from The Bleeding Cowboy comes from what was initially planned to be two separate albums–one to appeal to the pop country crowd, and one to appeal to the “new Outlaw” crowd. Since the plug was pulled on the project mid stream, neither album was fully completed. According to Montgomery, all the songs were scientifically formulated by professional Music Row songwriters to be mega-hits, except for the last one that he wrote himself.

Trigger: So The Bleeding Cowboy is a long time coming. Is it a sense of relief to finally be releasing music?

Michael Jackson Montgomery: Boy it sure is Trig, and let me tell you, this album is actually good, unlike that piece of worm-riddled shit Shooter Jennings is releasing. That boy needs to put down the feather boa and eyeliner and get on back to the good old country music. You know Trig I’m destined to be huge in country music because I’m both a pop country superstar and an Outlaw all piled into one awesome sex sandwich. I had to fight for this release, just like Willie and Waylon. Not like Shooter that got served everything on a silver platter and is living off his daddy’s name.

Trigger: I don’t understand, what is your beef with Shooter Jennings?

Michael Jackson Montgomery: That boy needs to quit disrespecting his daddy. As far as I’m concerned, if he ain’t up there on stage every night doing his best Waylon Jennings impression, then what good is he? He ain’t the next Waylon Jennings, I am. You want to look at the modern day Waylon Jennings, look know further than Michael Jackson Montgomery. I’m a true Outlaw that fought for my music. And I heard the other day Shooter has a movie coming out with his album. Well whoopee. I’ve got a movie coming out with The Bleeding Cowboy too. Actually I’ve got two or three movies. They just got green lighted. That’s what they say in Hollywood Trig, “Green lighted.” That’s means they’ve been approved for production.

Trigger: So tell us about The Bleeding Cowboy. What can listeners expect?

Michael Jackson Montgomery: This album is a very personal victory for me Trig. It was recorded in a very crazy time of my life. I came from nothing, unlike silver-spooned Shooter with his Hollywood girlfriend. I worked really hard on these songs, and this is an album with a message. It’s a concept album really, and folks will really be surprised what happens at the end. Despite being from a bunch of different studio sessions, it reads like a book. I’m pretty sure it will be the best album of 2013. Much better than Shooter’s piece of shit, that’s for sure.

Trigger: Did Shooter Jennings do something to you? Where is all this Shooter rage coming from?

Michael Jackson Montgomery: I can’t stand that dude. He’s disrespecting his daddy and he made some weird homo album a while back that had a bunch of techno music on it. What if Waylon were around today? You know Trig, Shooter asked me if I wanted to put him as a producer on my album. I was like “What? You did nothing.” He was like, “That’s okay, just put my name on there. It will help you sell albums.” I thought he was shitting me, but he was serious. This was at a bar in LA he invited me to. Wanted me to be a part of that dumb XXX thing he’s was doing for a while. He kissed my ass, but I didn’t bite. I saw right through his ruse.

When Shooter left the bar I saw him walking into some homo techno bar playing Nitzer Ebb or something. You’re right about that dude Trig, his music sucks. That “White Trash Song” is awful, and don’t worry Trig, the only Steve Young I knew about was a quarterback for the 49ers. You’re also right about the Tom Morello guitar solo on Shooter’s song “The Long Road Ahead.” In fact everyone who buys a copy of The Bleeding Cowboy is going to get a free download of the song with the Tom Morello solo edited out. I’ll tell you Trig, Tom Morello is a commie. He loves the terrorists. I heard him say it. I’d bet he’d just invite them all right into the country. He’d be like, “Come on in!”

Michael Jackson Montgomery has also just released the second single from The Bleeding Cowboy called “I Support The Troops More Than You.”