Mickey Newbury’s “An American Trilogy” is an Indelible Musical Work

“In America, one of the great things to do is listen to Mickey Newbury sing.” –Waylon Jennings

It always seems like the most creative among us are never fit for the masses. Their gifts are too blinding, too rich for the wide palette, and so it takes an interpretation of their genius through others to find the broader audience their artistic expression deserves. These creative originators may not be fit for everyone, but for those tragic musical junkies who have built up such a tolerance to the interpretations and derivatives peddled on repeat radio for these very many years, seeking out and discovering the musical headwaters of a movement is like the discovery of untold wealth; a second chance to enjoy music like you’re listening to it for the very first time.

Mickey Newbury would certainly qualify as one of these musical specimens, if not the ideal case study. Mickey was nothing short of a legend amongst his songwriting brethren, but was an artist whose own performance career was never graced with significant attention like many of the artists he lent his song material and inspiration to. A somewhat reclusive character who lived on a houseboat just outside of Nashville before moving away to Oregon to purposely get as far away from the music industry as possible, the case could be made that Mickey Newbury was one of the very first, if not the first true American country music “Outlaw.” Mickey was the first to be released from his contract with the intrusive RCA label and win the stipulation to be able to produce his own albums or choose his own producer—years before Willie Nelson and Waylon Jennings would accomplish the same from the Nashville recording establishment, partly inspired by Newbury’s story. 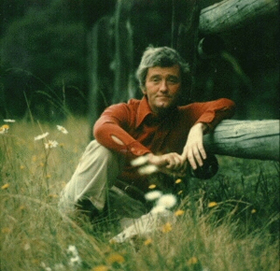 Just like Willie, Waylon, and Kris Kristofferson, Mickey Newbury was originally from Texas. Famous country DJ Ralph Emery calls Mickey the first “hippie cowboy.” And though Willie Nelson’s Phases and Stages from 1974 is usually given the credit of being one of country music’s very first concept albums, Newbury’s 1969 Looks Like Rain might be the more worthy candidate.

Looks Like Rain was the first installment in what would become an album trilogy from the gifted songwriter between 1969 and 1973, later to be christened An American Trilogy after arguably Newbury’s most memorable song of the same name. Though Newbury was best known as an original songwriter, “An American Trilogy” was a medley that included parts of the Confederate Anthem “Dixie,” the Bahamian lullaby “All My Trials,” and the Union army’s “Battle Hymn of the Republic.” It became Newbury’s signature performance piece, showcasing his incredibly powerful voice, and ability to conjure moments in music that haunt you well after the last refrain.

In 2011, the three albums of Looks Like Rain, ‘Frisco Mabel Joy, and Heaven Help The Child, along with 15 demo songs, rarities, and unreleased recordings were assembled together in hopes of presenting Newbury’s music to a new generation, and reminding an older generation of Newbury’s contributions. When you think of “Outlaw” songwriters, you think of rough and tumble characters like Billy Joe Shaver or David Allan Coe, but Newbury and his American Trilogy has a sparse, almost genteel approach, leaning more on organ and strings than steel guitar, giving it a reverence and a lifting action like nothing else heard in country music, then or now.

The first album Looks Like Rain works like one continuous track, spelling out a very personal narrative, with wind chimes seamlessly creating a bed in between songs, pulling you into the album’s depths; into the little proprietary world Mickey creates, and enhancing the entire experience beyond the allure of the individual songs themselves. 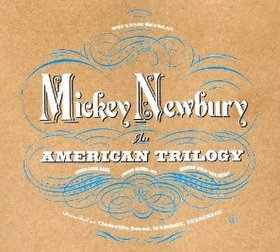 ‘Frisco Mabel Joy may be the most complete and accessible album of the collection, with the “An American Trilogy” opening song setting the mood. It loosely follows a young Southern man on a journey to find a lost love that traverses the American continent, and seems to tell the country’s story along the way. “An American Trilogy” captures such an inspired performance, it deserves to be considered right beside the greatest American compositions of all time like “Ode To The Common Man” and “This Land Is Your Land.” The album ends with the plaintive, but very enjoyable “How I Love Them Old Songs,” marking one of the trilogy’s most country compositions.

Heaven Help The Child illustrates the ever-present evolution, transformation, and insistence on growth and understanding that Mickey Newbury’s life was an exemplar of, while once again highlighting his propensity to create a seamless album experience and memorable moments. All three albums were recorded at Cinderella Sound in Madison, Tennessee, so the albums all work seamlessly between each other as well. You don’t skip around to select tracks on An American Trilogy. You push play and allow yourself to get lost in the music.

The American Trilogy era from Mickey Newbury’s body of work has become an absolute wellspring of musical material for other artists, and one that helped lay the groundwork for country music’s Outlaw era. Penning First Edition’s (Kenny Rogers’ first band) “Just Dropped In” is what made the world aware of Newbury, but after he released the first trilogy album Looks Like Rain, both David Allan Coe and Waylon Jennings covered the songs “San Francisco Maybel Joy” and “The 33rd of August.” Johnny Cash and Bobby Bare both covered “I Don’t Think Much About Her No More,” from the trilogy’s 2nd installment, and all of a sudden a who’s who of performers in Nashville were listening to Newbury and trying to figure out how they could give their own unique take on his landmark recordings.

Tompall Glaser, and the venerable Bill Monroe would go on to cover Mickey’s “How I Love Them Old Songs,” Elvis Presley did his own version of “An American Trilogy,” and the seemingly never-ending list of songwriting accolades for Newbury continues from there, including 8 cover and tribute albums released to him over the years.

Songwriters like to say that their songs are like children. If that is the case, Mickey Newbury is a father, grandfather, and great-grandfather many times over. His An American Trilogy is an indelible, essential work of the American songbook, from which many branches of American music sprout from.

Mickey Newbury’s An American Trilogy is available in a 4 CD box set, a 4 CD fold out with 24-page companion booklet, or in MP3 form. All tracks have been remastered from their original tapes. It includes a total of 41 songs.