Midnight – The Death of Hank Williams

Every New Years as revelers across the country celebrate the symbolic reset of the calendar, a much more somber anniversary passes in the realm of country music. On January 1st, 1953, Hank Williams passed away in the back seat of his powder blue Cadillac somewhere on the road near Oak Hill, West Virginia of heart failure, forever robbing country music of its first superstar at the age of 29. Hank’s death has gone on to become one of the most storied, and most intriguing moments in country music lore, somewhat shrouded in mystery because some of the facts surrounding his death are not known and never will be, and because of the weight the passing of Hank Williams put on the heart of country music.

The death of Hank Williams has taken on a greater reverence, and a deeper importance in the last year with the passing of some of the most important characters in Hank’s life, and in the story of his death. Braxton Schuffert, the man who arguably discovered Hank Williams, passed away earlier this year in April. Charles Carr, the driver of Hank’s powder blue Cadillac on that fateful trip and the last person to see Hank Williams alive, passed away in early July. A movie loosely based on Hank’s final days called The Last Ride was released June 6th. And this year marks 60 years after Hank’s death, and 90 years after his birth. 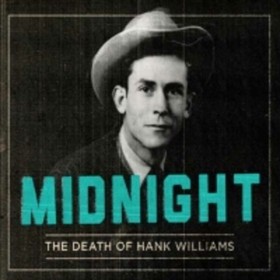 In remembrance of these significant events, milestones, and passings, traditional country artist Joey Allcorn has assembled a collection of songs in an album called Midnight – The Death of Hank Williams. The theme of the album is to relive the tragic passing of Hank Williams through music, though not all the songs are specifically about Hank. For example the album starts off with some words from Braxton Schuffert—only fitting because he was there at the very beginning of Hank’s career. Then the first song performed by traditionalist Jake Penrod is “Rockin’ Chair Daddy,” a song written by Schuffert with Hank Williams. Near the end of the album is a song called “Song For Charles” for Hank’s driver Charles Carr, written and performed by Bobby Tomberlin.

In between are songs that have great significance to the Hank Williams death narrative, including “The Death of Hank Williams” that as Joey Allcorn explains really inspired the project. “To me it was an interesting song because it was the very first Hank Williams tribute,” says Allcorn. “Nowadays, doing a Hank Williams tribute is just sort of par for the course.” The “Midnight” title track is a duet between Allcorn and Jake Penrod, and the traditional “Death Is Only A Dream” pairs Allcorn with Rachel Brooke. Other songs that were written about the death of Hank Williams include “Is There Something You Can Do (New Year’s 1953)” told from the perspective of Charles Carr, written and performed by Arty Hill, “A Legend Froze In Time” written and performed by David Church, and “Fallen Star” by Andy Norman.

Another interesting note about Midnight is the final track is a contribution by the recently-fallen country artist Wayne Mills who was shot and killed on November 23rd in Nashville. Along with Wayne’s guitar player Kyle Wilson and Joey Allcorn, they revitalize the Waylon Jennings tune “Are You Sure Hank Done It This Way.” This was the last track that Wayne Mills recorded and officially released for sale before his death.

Midnight is not your typical album project, and should be approach with that understanding and reverence. The point is to help the modern ear reconnect with those somber moments in the wake of Hank’s passing, and with the love each track is approached with, it carries this task admirably. The vintage audio of Braxton Schuffert starting off the album and DJ Nelson King of WCKY making the announcement of Hank’s death on the radio, along with the vinyl effect on the song “Death Is Only A Dream” help to set the somber mood and send you back to that time and place.

This album is not available on iTunes, Amazon, Spotify, or anywhere else. The only way it can be purchased is through the Hank Williams Museum in Montgomery, AL, with the proceeds going directly to the museum. This is not an album that will suck you in with groundbreaking original music; that is not the point. But as a commemoration of Hank’s death for the purpose of helping to keep his legacy alive through the museum, it grades high on all marks.