Mile 0 Fest set to transpire in Key West, Florida January 28th through February 1st has just announced their initial 2020 lineup. Jason Isbell and the 400 Unit lead the list of headliners along with the Randy Rogers Band, Robert Earl Keen, and Whiskey Myers. 36 other names from the Texas Music/Red Dirt/Americana realm have also been announced in the first wave of festival performers.

Unlike many other festivals, Mile 0 Fest offers unique listening experiences by taking over many of the music venues in Key West throughout the week for one-of-a-kind performances and collaborations. Attendees take in performances at places such as the Southermost Point in the United States, or Key West’s legendary Sunset Pier, or other island landmarks such as the Smokin’ Tuna and Durty Harry’s. Then every afternoon and evening the crowd gathers at the Truman Waterfront Amphitheater for main stage performances. Many performers play multiple times during the week, and the amount of tickets sold are capped to ensure everyone can see the main stage performances.

Along with numerous returning performers such as Wade Bowen, Jack Ingram, the “Queen of Mile 0 Fest” Jamie Lin Wilson, and Saving Country Music’s reigning “Best Live Act” Mike & The Moonpies, newcomers to the festival for 2020 include Hayes Carll, The Steel Woods, Cory Morrow, Will Hoge, Brent Cobb, Senora May, John Baumann, Kelly Willis, Roger Clyne and the Peacemakers, and Charley Crockett. Charley was scheduled to perform in 2019, but had to cancel due to health concerns.

Packages include fully curated opportunities with lodging, or you can buy tickets and figure out accommodations on your own. It’s not the festival experience for everyone since Key West is hard to get to and expensive to stay in, but it is one of the most enjoyable and well-curated music events in all of country and roots music. For more of what you can expect, you can read Saving Country Music’s 2019 recap.

This is just the first wave of performers, with many more to be announced. Along with the big names and headliners, Mile 0 Fest also offers numerous opportunities for musical discovery, giving performance slots to songwriters and up-and-comers. Packages go on sale July 15th. For more information, visit www.mile0fest.com .

…and many more to be announced. 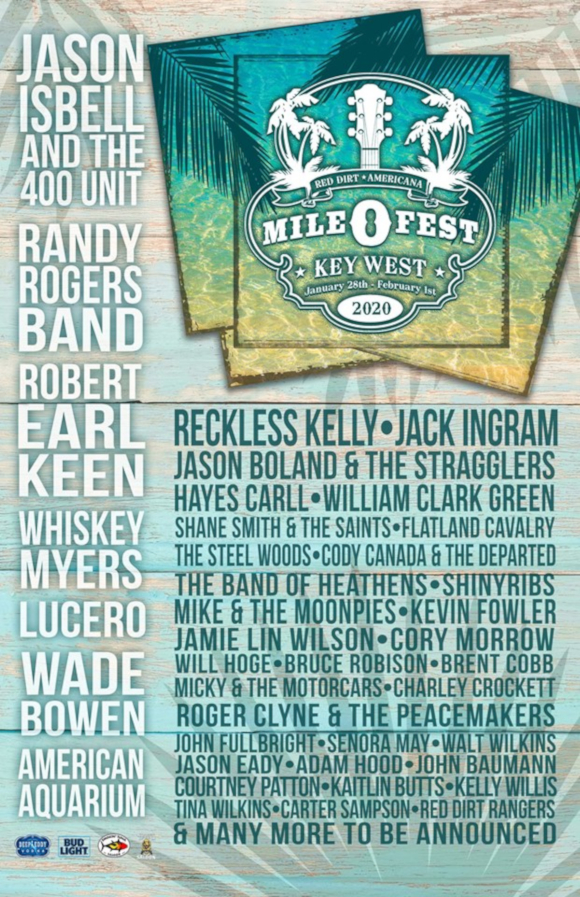