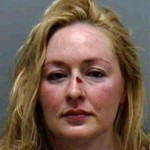 In yet another crazy twist in the unraveling story of country star Mindy McCready, she has now been accused of kidnapping the reigning American Idol champion with a similar-sounding last name.

Scotty McCreery was last seen lip syncing at a parade Saturday morning in Nashville, when right after his performance, witnesses say he was lured into an unmarked white cargo van by a woman matching the description of Mindy McCready, offering Scotty Oreo cookies.

“It was Mindy alright,” says eyewitness Blake Frankenfurter. “Crazy gleam to her eyes, striking blonde hair, and a baby bump that looks like she could BM out a pair of twins at any moment.”

Last week after McCready made headlines for kidnapping her 5-year-old son, she revealed she was 5 months pregnant with twins. 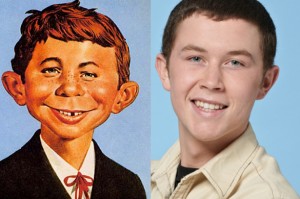 Nashville Metro Police say they are looking for Scotty, and are giving the description as “a young white male with a striking resemblance to Mad Magazine’s mascot Alfred E. Newman, who might still be holding a dummy, non-functioning microphone.”

Shorty after the abduction, Mindy McCready released a statement through her publicist.

Scotty McCreery is just so adorable and cherubic, and his last name is so similar to mine, I thought he would help ease my empty nest syndrome since CPS took my real baby boy away from me. Don’t you worry about Scotty! He is fine! I will be the best mommy he’s ever had, and I will love him and pet him like he’s my very own!

Police have yet to issue an Amber alert for Scotty, but his family and manager have warned if Scotty is away from his lip sync equipment for too long, he might go in to shock. Police say Mindy could have taken Scotty to a Chuck E’ Cheese, Scotty’s favorite restaurant. Experts say Scotty may not even know he’s been kidnapped.

“Since his American Idol win, his life has been so micro-managed and his free will so compromised, he may not know better than to follow all of Mindy’s orders,” explains child psychologist Ashton Olson. “Scotty may even sympathize with his captor, which is common, but may even be more common if Scotty can identify with Mindy as a product of the stilted entertainment business.”