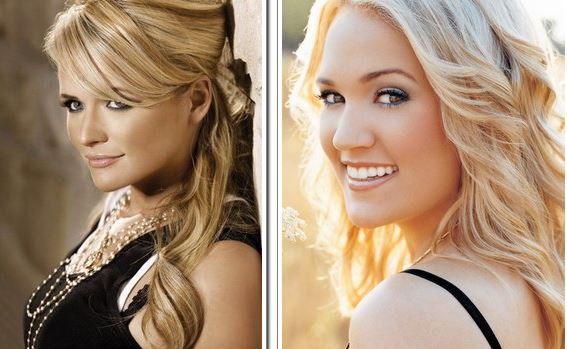 UPDATE: Read the review of the song and Billboard Performance.

Who would have envisioned this ever happening a few years ago? Not that Miranda Lambert and Carrie Underwood have been at each other’s throats over the years or anything, but for the last half decade or so, Miranda and Carrie have defined the polar opposites of mainstream female country in many respects. Miranda is the rough-edged, hard-scratch Texas girl ready to squeeze triggers and light shit on fire if provoked, while Carrie Underwood is the more refined and elegant American Idol winner with world-class pipes. High-caliber voice vs. high-caliber pistol. And though nothing but cordiality has reigned between the two publicly, their opposing polarities have created an unspoken friction, if only between elements of their fan bases.

Yet here they are, joining forces to release a duet called “Somethin’ Bad” as part of Miranda Lambert’s new album Platinum due out June 3rd, and debuting the song on the Billboard Music Awards. “Singing with Carrie Underwood is very, very intimidating,” says Miranda Lambert to the AP (see below). “She’s an amazing vocalist, I’m a big fan of hers, and asking her to do this was nerve-racking. I sent her an email, this long, blobbing email about if she wanted to sing on the record, it could be cool, but maybe she didn’t want to, if she liked the song, but she didn’t have to like the song. When I sent it I thought, ‘This sounds ridiculous.'”

Ridiculous or not, Carrie Underwood accepted, and “Something Bad” came into being. But the next question is, why this pairing, and why now?

Despite what the duo may or may not say or allude to publicly, “Somethin’ Bad” has one primary purpose: to break through bro-country’s stranglehold on country music. That is what this is about. The bro-country phenomenon has lasted for too long, and the pairing of country music’s two top females (Taylor Swift notwithstanding) may be the only way to break the bro-country monopoly. “Something Bad” is the symbolic, “We are the women of country, hear us roar!” statement. Yes ladies and gentlemen, war makes strange bedfellows.

Both the Lambert and Underwood camps are no doubt hoping this will be a big hit, and it’s no accident the Billboard Music Awards are also involved. The last time Miranda made it to the top of the Billboard charts was with another duet, when she paired up with Keith Urban in the song “We Were Us.” But that success was fairly short-lived. “Something Bad” is meant to be a statement against the male oligarchy. Even the day before the Billboard Music Awards, Miranda Lambert posted a photo to her Instagram account saying, “Welcome country’s new duo … Oklahoma Texas Line” with her and Carrie pictured in matching Thelma & Louise T-shirts, making a not-so-slight allusion to the bro-country extraordinaires Florida Georgia Line, and the “take no prisoners” attitude of this song.

“Two girls from Texas and Oklahoma that are living their dream right now,” Miranda continued to the AP. “We’re really rocking in country music, and we’re coming together as a force … If you’re sitting on the front row, you might want to scoot back. It’s a force, you know what I mean? It just feels exciting to me … It’s been too long since two girls in our genre have come together like that, especially in a song that’s kind of in-your-face. I’m excited, and I’m hoping that she’ll come to the dark side, and blow something up, or set something on fire in the video or whatever.”

The pairing does raise concerns that Miranda may be persuading Carrie Underwood to the dark side of female country music, and not just figuratively. As a song on Miranda’s upcoming record and not Carrie’s, “Somethin’ Bad” features Miranda in the driver’s seat, calling the shots. And for a while now, Carrie seems to have been somewhat following Miranda’s dominating style of these “woman scorned” revenge songs that in some respects are the female version of bro-country—using song formulas that swap beer, trucks, and tailgates, for smashed taillights, cat fights, and bonfires fueled by old boyfriend’s mementos, however less frequent and better-written as they happen to be.

Make no mistake, “Something Bad” is not just another song. This is Miranda and Carrie taking a baseball bat to bro-country’s pretty little souped up 4-wheel drive, and it will be fun to see just how this attempt to crash the good ol’ boy party at the top country’s charts will be received.