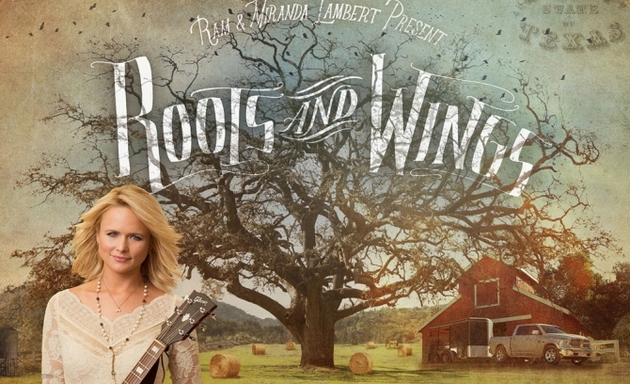 On Thursday (1-22) country music fans were treated to a surprise when Miranda Lambert unexpectedly released a new song totally divested from her recent album Platinum called “Roots and Wings.” The song starts off a little checklist-like, talking about red dirt stains and tall pine trees, but resolves in one deliciously juicy “I got roots, and I got wings” lyrical hook that illuminates how sometimes the same things that ground us and make us who we are, are the same attributes that can make us soar through life—a message that country music itself might find beneficial to heed.

Miranda wrote “Roots and Wings,” and the short 1:10 video that accompanies the release included pictures and locations from Miranda’s real life narrative. Miranda’s Platinum album was one of mainstream country’s critical favorites in 2014, and “Roots and Wings” according to early listener feedback and this critic’s assessment is already arguably just as good, if not better than anything else on that effort, even before we’re able to hear past the 1:10 mark.

Oh but there’s a hitch. You won’t find “Roots and Wings” on iTunes or your local country radio, at least not yet. Nope, the occasion of the song’s release is a Dodge Ram Trucks commercial. Cue Ralphie from The Christmas Story, again…

Miranda signed an endorsement deal with Ram in November of 2014, and “Roots and Wings” is the latest result of the auto maker’s continued Miranda Lambert-themed roll out. It’s also part of a larger trend by Ram to aggressively enter the country music space to appeal to the genre’s red-blooded, blue-collared, income-positive consumers who are known for working hard and spending their money.

Ram’s brand has been popping up all over the place in country lately. They’ve partnered with Yahoo Music to sponsor the Ram Country music outlet, which was one of the first places the new video and song appeared. Ram has become a big sponsor on country radio and a big advertiser for country music awards shows and tours. Believe it or not, Ram even reached out about a year ago to see if there was a sponsorship opportunity with Saving Country Music, and we conducted a conference call tossing around ideas. Of course I probably screwed that up when around the same time I decided to take the ACM Awards to task for nominating Justin Moore for New Artist of the Year when he was clearly ineligible, and made such a stink about it the ACM’s had to publicly respond. Why would Ram Trucks care? Because they were the primary named sponsor of the ACM’s fan-voted New Artist category in 2014, and a big sponsor of the ACM’s at large. Oh well, you can always find new ways to jazz up Ramen.

What Miranda Lambert is doing is in no way unprecedented, whether you want to consider Will Hoge’s placement of the song “Strong” with Chevy Trucks from a couple of years back, or even Hank Williams peddling Mother’s Best flour back in the 1950’s. Product endorsements and even song placements in advertising are nothing new in country whatsoever, but we’ve definitely seen an uptick lately in the amount of country songs, and good ones at that, being released as the soundtrack to commercials as their first and primary purpose, instead of being used in commercials after they’ve become recognizable by the public as hits. This seemingly new trend continues to blur the lines between commercial content and creative output that could pose some difficult dilemmas for music moving forward.

The country music demo is hot right now, and everyone wants a piece of it. Remember that Hillary Clinton country music campaign commercial from a while back? But what is a country consumer to do when listening to these songs and trying to judge them as advertising or as an artistic effort? Will it come to the point where country music is nothing more than one big commercial, and music unadulterated with advertisement either in content or history will be the “break” instead of the commercials themselves? It’s supposed to be the songs that sell the commercials, not vice versa. The move by auto makers to make these songs intertwined with the products they endorse before they’re released is an intelligent one. Even if the song goes on to bigger and better things beyond being heard in a 30-second snippet between football game snaps, it will forevermore be linked with their product. What do you think of when you hear Bob Seger’s “Like A Rock,” or “Our Country” from John Mellencamp?

Maybe these artists are happy for the opportunity to take one of their songs and make it a universally-recognizable part of the American advertisement carousel, because it will potentially give it more exposure than being a middling single on country radio, if it’s successful on radio at all in today’s environment. Even this truth may present a slippery slope though, where artists like Miranda Lambert deem the advertising venue to be a better vehicle to get their songs to the public than the music industry. Does it forever taint a song if it starts out selling products instead of an album single?

“Roots and Wings” is damn good song. At least what we’ve heard from it. So why not release it to the public, or to radio, or let it end up on a future album like Will Hoge did with “Strong.” Because country radio needs songs like this, especially from one of the few women that country radio will actually play. If Ram Trucks wants a piece of the action somehow, hey, more power to them. In an environment of dwindling revenue from downloads and physical sales, these endorsement deals may be the only thing keeping music afloat, which may constitute its own dire statement about the health of music in America. But ultimately keeping the lines between the creative and the commercial clearly drawn certainly seems like a prescient and wise priority for music, doesn’t it?