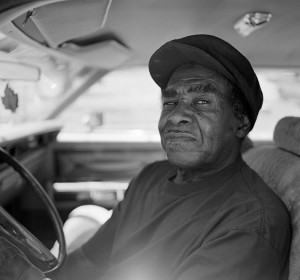 Mississippi blues legend T Model Ford, who became a roots icon along with R.L. Burnside, Junior Kimbrough, and many other older blues artists from Mississippi through Fat Possum Records, has suffered a stroke. This is not the first stroke T Model has suffered, but the people around him were describing the always-jovial, 90+ years-old blues player’s spirits as “uncharacteristically low.” Since then his health and spirits have improved some.

T Model was admitted to Greenwood Leflore Hospital in Greenwood, MS over the weekend after suffering a stroke, or possibly a series of strokes. According to T Model’s wife Miss Stella, initial tests indicated some serious blockages, and T Model was to undergo angioplasty and start physical therapy. However, because of his age and general health, angioplasty was taken off the table. Since then his health “…has improved a bit and has regained partial use of his right hand and can walk a bit using a walker,” according to family friend Randy Magee. Today, (Wednesday 5-23) family friend Roger Stolle reports that T Model was scheduled to be discharged from the hospital and sent to a physical therapy facility closer to his home. 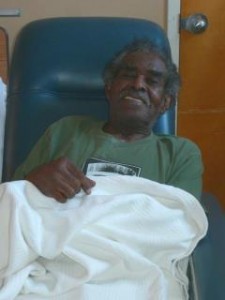 T says he’s doing fine folks. He had just come from physical therapy and his lunch came shortly afterwards… let’s just say loss of appetite IS NOT among T’s problems. He showed me that he could move his right arm, hand and fingers, but confided that he couldn’t remember how to play his guitar. He was telling me that he’d forgotten how to sing and a speech therapist came in to start working with him. I gave Stella some cash that some friends from the Netherlands sent for T and left him with the therapist as he already had a room full of family there.

T Model Ford, born James Lewis Carter Ford is the last surviving blues man from the original crop of artists the label Fat Possum Records sought out to make records of and preserve their sound beginning in 1992 from the North Mississippi region. He regularly tours with the Seattle blues band GravelRoad, and is scheduled to play this year’s Muddy Roots Festival. T Model’s actual age is unknown, though it is thought he was born sometime between 1921 and 1925. He recorded 5 albums for Fat Possum from 1997-2008, until moving to Alive NaturalSound Records. T Model’s sound along with the other North Mississippi blues legends has been given credit for inspiring the sounds from artists like The Black Keys and Scott H. Biram.

The Ford family is seeking donations to help with expenses. Information on where to donate can be found below. The Saving Country Music donate button has also been activated in the top right column of the site, so folks wishing to donate through paypal can do so there.