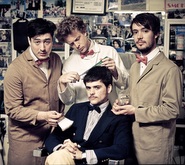 The comments by Marcus Mumford were made to Rolling Stone in a feature posted today that includes comments from all four members of the UK-based roots rock band.

A recurring criticism of Mumford has been that many of the songs on their two albums Sigh No More and Babel sound very similar. The band acknowledges this in a few succinct quotes to Rolling Stone, with keyboardist Ben Lovett saying specifically, “I do feel like we’re ready to make the departure. There’s definitely cohesion between the two albums. Now that we’ve done that, we’re not desperate to walk away from that sound, but we’re willing to explore what else we could do. These two albums are like brothers. Do something that’s a cousin.”

So what could that ‘cousin’ be? According to front man and main songwriter Marcus Mumford, it could involve hip-hop and rapping, telling the Rolling Stone:

“Like, hip-hop,” Mumford says with a grin. “We really want to rap. We’ve just got so much to say saying it through a melody doesn’t really work for me. We’ve been talking with Jay-Z about it, you know. It’s gonna be a fresh experience for our band.” Does the band rap in the practice room? “Yeah,” Mumford says. “We’re like, ‘Motherfucker!'”

Since the comments were posted this morning, and since they were served up in a fairly ambiguous frame of reference, the internet has been agog at the idea of MC Mumford making an appearance in the coming years. But taking into consideration the Rolling Stone’s propensity to sensationalize things by giving them little context, and the very unlikely scenario that Marcus Mumford truly believes that saying things through melody “doesn’t really work” for him, this seems more a ploy to get folks talking, and to keep Mumford’s name on the tip of pop culture’s tongue. Who really believes Marcus Mumford would try to spread his wings by figuring out how to work “motherfucker” into their music?

I may have to eat these words when a Mumford/Jay-Z collaboration gets released exclusively to iTunes in six months, and if that scenario plays out, that will take the theory that all popular music is collapsing into one big mono-genre to a whole other level. But until then, let’s not let a joke be perpetuated on us.