More Than Just Miranda Lambert and Anderson East Hooking Up 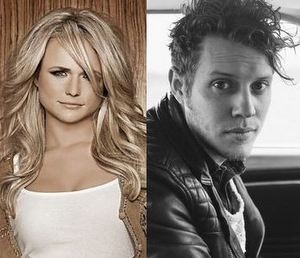 The country music media beat is such a wasteland of sycophants and soundboards all residing in a veritable echo chamber with the only purpose to their existence being to prop up the stilted facade Music Row wants the public to see. Jason Aldean runs around in blackface and doesn’t even feel enough heat to have to issue an apology. Brantley Gilbert’s PR team releases a statement saying he gave $10.5 million to Toys For Tots, and nobody stops to recognize that’s more than his entire personal wealth combined. It’s a miracle country media can say anything without reading it off of a press release verbatim.

Today the big news was that the recently-divorced Miranda Lambert is in a relationship with Americana upstart and throwback rock and roller Anderson East. US Weekly had what are dubbed as the “exclusive details”—which were nothing more than 12 words from two unnamed sources who say the duo has been dating for a month. That’s interesting, because dozens of people saw Lambert and East getting cozy during the final Live on the Green concert in Nashville all the way back on September 12th—some 3 1/2 months ago. Miranda was in attendance to see Anderson perform, and later the two scurried away with each other. The Miranda Lambert / Anderson East relationship was the best (or worst) kept secrets in Nashville in Q4. Everyone was too paralyzed to say anything in hopes their little periodical might be the one to land the “exclusive” details.

But really, whose business is it? Probably nobody’s as far as the personal matter goes. But as far as the music goes, the implications could be interesting, if not significant. Heading into the holidays, one of the biggest stories in both mainstream country and independent Americana was the impending arrival of a conceptualized record spearheaded by producer Dave Cobb called Southern Family. Both Miranda Lambert and Anderson East appear on the exclusive and star-studded track list that seems to take the usually segregated worlds of the mainstream and independent, and mashes them together. Major label artists Zac Brown and Chris Stapleton also appear on the record. So do the independently-signed Jason Isbell and Holly Williams.

Anderson East might not have the name recognition of some of the other names in the Dave Cobb producership stable, though of course all of that might be changing very, very soon. Anderson is, however, one of Cobb’s most important projects. Unlike Sturgill Simpson, Jason Isbell, or Chris Stapleton, Anderson East is signed to Dave Cobb’s Elektra Records imprint; the same imprint the Southern Family concept record is being released under. Anderson’s much more a throwback rock and roller, bluesy and soulful type of performer than a country artist. But with the rise of acts like Leon Bridges and the Alabama Shakes, the rock and roll side of the roots world is experiencing a tremendous upsurge, similar to how the string band sector became hot a few years ago with Mumford & Sons—though this Muscle Shoals vibe feels much more sustainable in the long-term.

Did Anderson East and Miranda Lambert meet while working on Southern Family, with Dave Cobb playing Chuck Woolery? Perhaps that’s a good working theory until we hear the real story, but in truth they could have met anywhere. Anderson East has worked as a guitar and piano player in Nashville studios (though he doesn’t appear on any of Lambert’s records), and he’s opened for Holly Williams and Sturgill Simpson in the past. So even though he’s a relative unknown to the mainstream public, in the right circles, Anderson East is known quite well, and highly regarded to boot.

But forget all the sappy relationship stuff, and how it happened and where it might lead. Miranda Lambert ditching Blake Shelton and ending up with Anderson East might be the perfect illustration of the drastic role reversal 2015 has ushered in throughout the greater country music realm, and how 2016 could be poised to completely turn everything upside down. 2015 was the year Chris Stapleton upset everyone at the CMA Awards. It was the year Jason Isbell, Aaron Watson, and Blackberry Smoke landed #1 records.

Heading into 2016, the way we think about the mainstream and independent worlds in country music could soon become null and void, or at least flip flopped. The independent ranks, fueled by the likes of Thirty Tigers, consolidation around the Concord Music Group with labels like Rounder Records, Sugar Hill, and scores more, the re-launching of New West (and that’s just naming a few), puts independent labels and their artists on a strong footing moving forward to where the rest of the mainstream industry must start to recognize artists that aren’t residing on the majors or risk losing their relevancy in the marketplace.

Mainstream radio is no longer the benchmark, and it’s no longer necessary for the success of an artist. Chris Stapleton’s Traveller might outsell all other country music releases in the entirety of 2015 in the next couple of months, and that’s without barely a lick of radio play. It’s not the artists who should be worried about being relevant by making it to mainstream radio, it’s mainstream radio who should be worrying about it’s marketplace relevancy if it continues to ignore some of the hottest artists. Mainstream radio is quickly becoming niche programming for a small, but dedicated sect of corporate-minded super consumers, who despite being a lucrative bunch to target, are shrinking in numbers steadily.

Meanwhile, Miranda Lambert is running around with some East Nashville-style throwback hipster rock and roller dude, and Sturgill Simpson, Jason Isbell, and Chris Stapleton are gracing GQ’s center fold. The truth is Miranda has always been more like us than them. Go back and listen to her first two records and see if you disagree. Some said when the Southern Family concept record first surfaced that she didn’t belong there. But her efforts to highlight worthy songwriters like Adam Hood, Chris Stapleton, Brandy Clark, Ashley Monroe, even Fred Eaglesmith, John Prine, Steve Earle, David Rawlings and Gillian Welch, and Patty Griffin show she knows right from wrong, and up from down. But the country industry needed a female superstar, and they needed one badly. And Miranda Lambert’s been willing to play along. At least up until recently.

At the CMA Awards, Miranda ditched her designer dress for a Chris Stapleton T-shirt halfway through the show. She looked like Cinderella after the magic had worn off. That’s where Miranda started when she was a no name singer and songwriter from east Texas struggling to get noticed. Now, perhaps, she’s back where she started. Symbolically, at least. It’s not about wanting the new Miranda Lambert versus the old Miranda Lambert. It’s about wanting the real Miranda Lambert.

Will the relationship last? Will it become some serious thing? Will we see Anderson East on the arm of Miranda Lambert at the ACM Awards, and once again will independent fans sit back and wonder what the hell happened to rooting for unknowns who seemed to never get a fair shake or the attention they deserve? Time will tell, but Miranda Lambert searching low instead of high for her new hubby, and all of a sudden watching yet another quality talent from the independent ranks start to trend higher, is yet another sign that things are beginning to open up, the gulf between independent and mainstream is starting to shrink, and the country music industry could drastically change in the coming months.