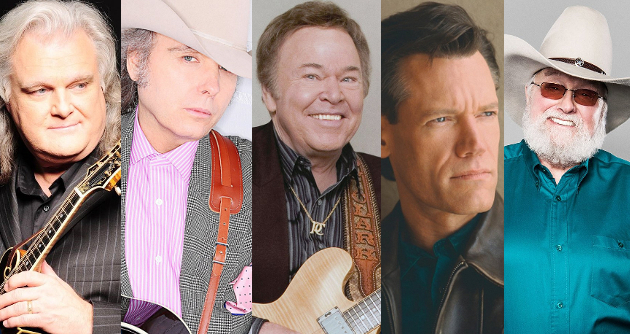 Days after the surprising announcement that seven previous Entertainer of the Year winners will be performing on the 50th Annual CMA Awards, including Charley Pride, George Strait, Vince Gill, Alan Jackson, Brooks & Dunn, Alabama, and Reba McEntire, the CMA’s announced Wednesday afternoon that another crop of traditional country stars will be performing on the presentation.

As the Country Music Association clearly labors to reach out to not just young and new country fans, but country fans of all stripes, they have added the names of country stars Charlie Daniels, Randy Travis, Ricky Skaggs, Roy Clark, Dwight Yoakam, and Clint Black to the lineup.

What is still to be determined is if these past legends of country—which in many cases have been summarily abandoned by institutions like the CMA Awards in recent years—will get opportunities to perform full songs, or if it will be more of a collaborative or medley performance, pairing songs and/or artists together to save precious performance time.

Regardless, the amount of older talent announced on the presentation so far is quite unprecedented. According to Saving Country Music’s calculations, of the announced performers so far, 16 performers who could be considered either country legends or artists whose careers started before or during the “Class of ’89, and 17 performers who would be considered new or contemporary artists. When you also factor in that newer artists like Chris Stapleton and Kacey Musgraves also appeal to many older country fans, it’s just about a push between the old and new being presented on the awards.

Compare this with the 50th Annual ACM Awards earlier in 2016 that only had one country legend, Dolly Parton, and one older contemporary performer, Tim McGraw.

Curiously missing so far are Blake Shelton and 4-time CMA Entertainer of the Year Kenny Chesney, as well as older living legends such as Willie Nelson and Dolly Parton. But these names could be forthcoming from the CMA.

READ: If You Can’t Be Happy as a Country Fan Now, You Never Will Be

The 50th Annual CMA Awards will be broadcast November 2nd on ABC. Make sure to stop by Saving Country Music for our always-snarky CMA Awards LIVE blog.