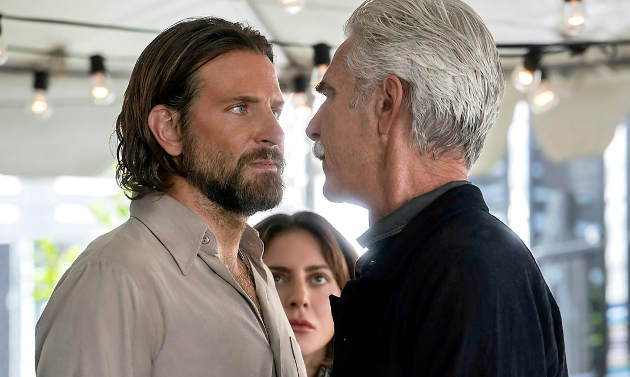 How many times can you remake the same movie and it still be good? If it’s a classic story told with passion, is well-acted and directed, and expertly updated for the modern context, the answer would be at least four. Some stories are so good the first time, they just need a fresh coat of paint every few decades to keep going instead of endless strings of sequels. Some stories are so timeless, telling them anew is still often better than composing an entirely new one. And if you’re afraid how your remake will be judged by history, make sure yours is the definitive version of the franchise, which producer, director, co-writer, and lead actor Bradley Cooper has done here.

A Star Is Born is a big moment for Americana music. After you see Bradley Cooper’s star character Jackson Maine as the movie opens, the next person appearing on the screen is Lukas Nelson. Willie Nelson’s son and his band Promise of the Real appear as Jackson Maine’s backing band throughout the movie, though they don’t carry any speaking parts. Lukas Nelson became the primary musical consultant for the film, co-writing six of the film’s songs, as well as producing most of the soundtrack. One of the signature songs from the film is called “Maybe It’s Time,” which is superbly written by Jason Isbell. Brandi Carlile receives a pretty big moment in the film, and a keen eye will see cameos by people such as Don Was and others. Natalie Hemby, Hillary Lindsey, and Lori McKenna also receive songwriter credits in the soundtrack.

In previous eras, a film such as this might launch hit songs and musical superstars, especially for how well it has been received. But the fractured nature of popular culture these days unfortunately means this is unlikely going to be the case aside for the already-established Lady Gaga. Don’t expect Lukas Nelson and Jason Isbell to become household names over A Star Is Born, though they will likely get a boost in name recognition outside of Americana circles. The soundtrack can’t even be considered for the Grammy Awards this year due to being released too late in the season. But rest assured, one or some of the original songs from the film will compete for Best Original Song at the Oscars.

A Star Is Born also contains some other culturally significant threads to the musical realm. Though some plot overviews paint main character Jackson Maine as a country star, this is not entirely accurate, or what producer and director Bradley Cooper had in mind. Jackson Maine is more of a roots rock character—a guitar slinger and songwriter, very similar to what Lukas Nelson does, who directly inspired the part when Bradley Cooper saw Nelson performing with Neil Young at the Desert Trip concert on the Coachella grounds in Indio, California in 2016. Kris Kristofferson, who played the lead in the 1976 version of the film, definitely plays into both the poetic mystique and the specific mannerisms Bradley Cooper expertly adopts to bring Jackson Maine to life.

Jackson Maine is a character that is gritty and real, not always singing or playing the prettiest, but always bringing the music straight from the heart and connecting with the audience. In multiple moments in the dialogue from both Bradley Cooper’s and Lady Gaga’s characters, the polished nature of pop music is put down, specifically dance choreography and image that often go hand in hand with the pop realm, and are the antithesis of what’s cool in country rock. Some of the dialogue from Jackson Maine is excellent quote material, working as direct maxims of why authenticity in music is so important. In a music sense, Jackson Maine is the hero.

Meanwhile Lady Gaga’s character Ally is one that suffers folly when she embraces the highly-produced trappings of the pop world, though later blossoms when she rebukes those fallacies and embraces authenticity. In this polarized world, this remake has launched plenty of secondary discussion threads, with pop fans feeling like the film is putting down their world, while other politically-motivated do gooders say it’s damaging to portray the only road to success for a woman is through a man. But the reason A Star Is Born works for a fourth time is because director and lead actor Bradly Cooper was able to see a vision for the story. A Star Is Born is not a rebuke of pop music specifically, it’s a powerful message of the importance of authenticity in music in general, which is something that many pop critics applaud Lady Gaga for in her real life musical career.

In their personal lives, the characters of Lady Gaga and Bradley Cooper are juxtaposed, with Gaga being the even-keeled rock who perseveres, and Bradley being the out-of-control drunk and drug addict—the classic tragic character being saved by and nursed back to health by the love interest. Once again such role casting can run afoul with the politically correct crowd these days, but the reason these roles resonate so deeply is because they’re so true and common.

A Star Is Born is superbly acted and directed. It will be an Oscar contender across the board, especially for Bradley Cooper. Lady Gaga gives nothing up coming to her role as a musical performer first. Sam Elliot plays the same character in every appearance he makes, whether it’s a movie, TV show, stage presentation, or even commercial, and every time his performance only improves. His portrayal of Jackson Maine’s much older half brother Bobby is masterful, and your only wish there were more opportunities for dialogue between the two. Andrew Dice Clay playing Lady Gaga’s father is about the only soft spot. Perhaps partly to blame on the dialog, you never really get to know him or his relationship with his daughter, unlike the strong chemistry that materializes between Gaga and Bradley Cooper, and Cooper and Sam Elliot.

Perhaps a bit more time could have been spent delving deeper into the reasons or behavioral patterns of Jackson Maine’s drinking. Some of the moments of the movie necessitate you suspend disbelief, like the first time Gaga performs on stage with Cooper via a song they drunkenly half wrote the night before in a parking lot. It also remains frustrating how Hollywood still can’t get the live performances of songs correct. Both Bradley Cooper and Lady Gaga sing their own parts, but for the cameras, they lip sync to the studio recordings. Generally it’s pretty close, but to the trained eye, it drains the energy from important moments. As Jackson Maine would say, it’s not real and from the heart.

It’s eerie as you watch the film unfold how true the story feels, and timeless it is in every sense of the word, even if you’ve seen the previous incarnations of this story and have a good feel on how it will all end. Whether it’s reading the current headlines about Evan Felker and Miranda Lambert, or citing the dozens of other examples throughout music history, the way music, fame, alcohol, and love intermix to compose an intoxicating and sometimes tragic concoction is eternal, often causing a wreck of life for the ones tasked with navigating the rigors of the human condition in the public spotlight, while they’re often the worst equipped to do so as creative types.

A Star Is Born was worthy of a remake, and constitutes an important moment for roots music and some of it’s most important personalities. While mainstream music culture continues to shoot its gaze over artists such as Lukas Nelson, Jason Isbell, and so many others, Hollywood sees their value, and has opened up an avenue for intervention into their obscurity. But ultimately this film feels like a moment not primarily for Americana, but for director, producer, and lead actor Bradley Cooper, who takes the romantic muse of music, and brings it to life. Like a good love song, no matter how many times it’s been done before, passion and eternal truths can render its appeal timeless and universal. Bradley Cooper has proven the enduring power of a good love story with A Star Is Born.