The Muddy Roots Festival has just announced that they will be heading back over to Europe once again this summer for the 2nd Annual Muddy Roots Europe June 14-16, 2013 at Cowboy Up Saloon Waardamme Belgium. They have released a lineup that spans the globe. From the US, from The Netherlands and Germany, to all the way from Brazil, bands and fans will be trekking from all over the world.

“I’ve made a lot of friends in the old world that are lending a hand,” says promotoer Jason Galaz. “A hand full of other festival promoters have reached out with help in promotion and have been teaching me the ins and outs of putting on an event in another country. It has been nothing but support from small promoters to mega festival promoters. Many local bands have been asked to join the bill as well as a few acts from around the world. It just goes to show you that all this hard work is and adventure has been effective in changing the underground music climate worldwide.”

Muddy Roots will also be adding a brand new domestic show called the Muddy Roots Spring Weekender on May 10-11 in Adams TN, just north of Nashville. The Red River Canoe Campgrounds where it will be located has permanent restrooms, showers, laundry room, ample RV hookups, and shade trees.  Folks can rent canoes and go down the river. This event is not intended to be as big as the Muddy Roots Festival held on Labor Day weekend annually, but will still have the great music people have come to expect from Muddy Roots. They are planning to have about 15-20 bands perform “…but you know how I tend to get carried away.” says Jason Galaz. “I really want to give folks the most I can and then some.”

Additionally, connecting the two Muddy Roots events is going to be a “super-tour” of sorts, fitting Joe Buck Yourself, Rachel Brooke, Viva Le Vox, and Sean Wheeler y Zander Schloss together. The 4 acts will be playing the Spring weekender, then tour the US, and then Joe Buck Yourself, Viva Le Vox, and Rachel Brooke will end up at Muddy Roots Europe.

The full lineup for the Spring Weekender is still being forged, but here is the preliminary lineup: 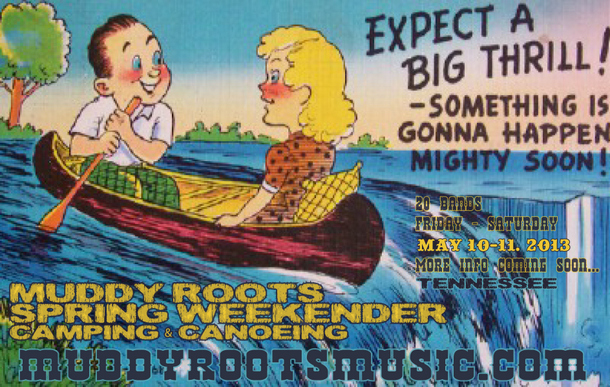