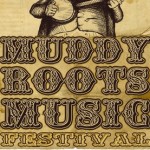 Muddy Roots isn’t just a festival my friends. No. It’s an act of solidarity. It is a force of the collective Will of real roots fans united from disparate backgrounds, coming together to say “We are here, and things can work differently.” It is proof that music can be true to it’s roots, while still innovating and moving forward. It is an example how success can be measured not simply by money and numbers, but by the amount of memories made, the amount of friendships forged, and the strengthening of community through a focus of sustainability. The Muddy Roots Festival isn’t just a big party, it is principles and philosophies in action; it just happens to be one hell of a good time as well.

In 2012, the Muddy Roots Festival will take place August 31st-September 2nd, at the June Bug Ranch in Cookeville, TN, where it was held the previous two years. Please note that below is just the initial lineup. A dozen or so additional names will be added in the future, others could change, and future names could include more headliners, or your favorite band that is not on the list at the moment.