The Muddy Roots Festival is gearing up for its 5th annual event in the rolling hills just outside of Cookeville, TN, about an hour or so from Nashville to the east for the upcoming Labor Day weekend, and boasts an impressive lineup of many country and bluegrass legends, including Del McCoury, Bobby Bare, Ricky Skaggs, Ralph Stanley, Ray Wylie Hubbard, Peter Rowan, and an impressive under card of insurgent roots artists such as Th’ Legendary Shack Shakers, Possessed by Paul James, and Southern Culture on the Skids. 75 bands in all will play the event which offers free camping and BYOB privileges for patrons.

Festivals have been a big topic in the news this summer with so many new festivals popping up, some high profile cancellations of festivals and last minute cancellations of appearances. The festival landscape is becoming crowded very quickly, especially in middle Tennessee, but Muddy Roots promoter Jason Galaz is grateful to have established his festival over the last few years.

“There were definitely folks that came before us when it comes to independent music festivals but it indeed seems we did the right thing at the right time,” says Galaz, whose quite busy these days taking care of last minute preparations for the fest, and getting ready for a slew of pre-parties, including Wednesday’s Exit/In show in Nashville featuring Th’ Legendary Shack Shakers and Slim Cessna’s Auto Club. “I think our unknowing achievement at the time was to pull together a variety of music communities from across the globe in to one tent.”

One of the reasons The Muddy Roots Festival was able to survive those first few formative years is because unlike other big budget festivals, it’s more a labor of love as opposed to a profit and loss situation. “Our main Muddy Roots fest should go extinct each year,” says Galaz. “It succeeds in ethos, philosophy and in spirit but it does not thrive financially. If we were doing this only for business we would and should have shut down a long time ago. I simply can not see my life with out it. It is what I live and breathe at all hours. I gladly rob the hours of the night that I should be sleeping and give them to the cause.”

Something that makes Muddy Roots unique is that each year, the flavor of the festival can change. Though always centered around roots to some extent, previous lineups have seen punk bands like Black Flag fill the headliner spot. “One of the perks of being an independent festival that doesn’t focus on becoming a massive event is that I get to book who I want,” Jason explains. “Most often I just book the bands I would want to see. I don’t need to appeal to 80,000 people. In fact, I don’t want more than a few thousand as it would ruin the intimacy that roots music naturally lends itself to. I will always keep my options open but in the last year I’ve had honoring the older legacy acts on my mind. We’ve had too many dying off and I feel I need to do something for them while they are still with us. Our folks will treat them like the rock stars they really are until the end. All these old timers that forged the way 40 to 70 years ago have a significant historical relevance to American music and we intend to pay respects to that.”

What is Jason Galaz most looking forward to at this year’s Muddy Roots Festival? “Knowing that this Sunday I will hear Del McCoury sing ’52 Vincent Black Lightning’ on our wooden stage in a field 20 minutes out of town.” He says the festival, just one of many events Muddy Roots throws throughout the year, including the Nashville Boogie Vintage Weekender set for next year in May at the Gaylord Opryland and Grand Ole Opry House, and a European version of the festival, is all part of a greater effort.

“What I am trying to do is get the brand name more known so that we can make a bigger difference in the music industry. Five years ago genuine country was on it’s last leg, wounded and bleeding glitter. The tide is turning and I want to continue to fight the good fight with those like us. I’ve started running billboards in Nashville. Muddy Roots has an annual showcase at Folk Alliance and now at Americana Fest. We will be attending IBMA for our first time to start networking ad plant our seeds. We do more in the community like set up booths at local street festivals and have our bands play.”

Muddy Roots has also contracted to book the Nashville Palace in Music Valley near the Grand Ole Opry, owned by Jesse Lee of Robert’s Western World. “Johnny Cash, George Jones, Kitty Wells, and scores more have all played the Palace and Randy Travis was discovered there as a dishwasher who sang on stage one day. The significance of our companies coming together to continue the tradition is incredibly important as an alliance for authentic country and roots music. It’s truly an honor.”

But this Labor Day weekend the focus will be in Cookeville for the three day event as independent roots fans from all around the country, and even some from around the world gather to celebrate the music. 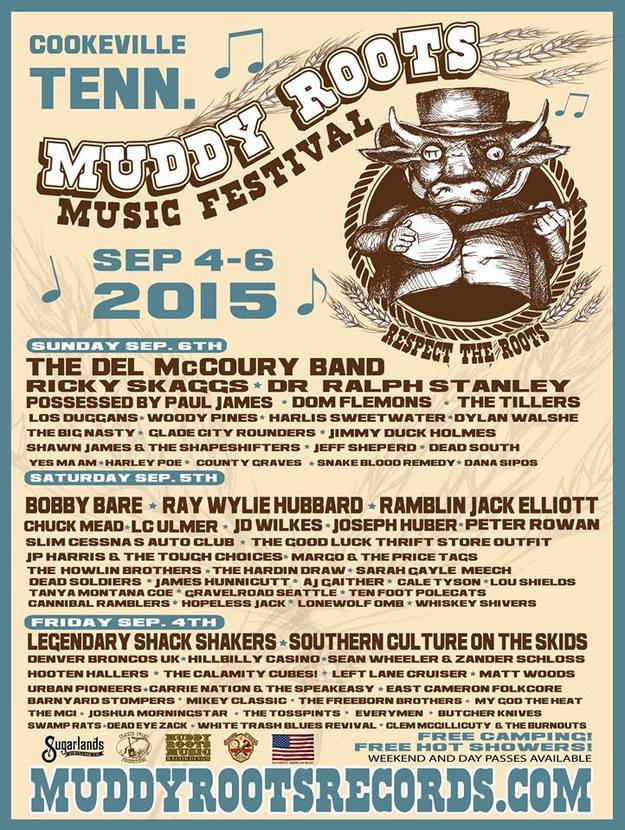 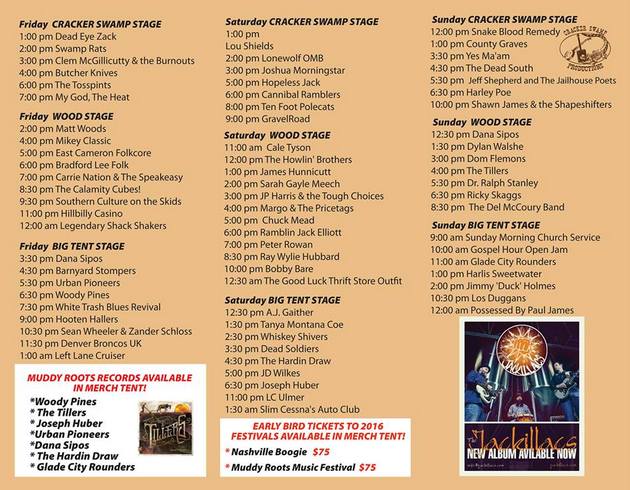