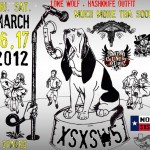 am very excited to announce a unique partnership between Saving Country Music, Hillgrass Bluebilly Records & Entertainment, and Muddy Roots Music (The Muddy Roots Festivals) to bring together the 5th Annual XSXSW showcase, aka XSXSW 5, as part of the annual mid-March gathering of the tribes in Austin, TX known as South By Southwest.

The idea is to create a larger and more robust footprint for underground country and roots music at what is the yearly premier music event for the independent music industry, held in the “Live Music Capital of the World.” Unfortunately over the years, SXSW has become more “industry” and less “independent” as the festival has grown, and it has become a logistical nightmare for bands and fans alike to attend. SXSW is in essence a “pay to play” event, asking for non-refundable money for artists to be considered for officially-sanctioned showcases, and the event overtakes the entire downtown corridor of Austin for official SXSW use.

The spirit behind XSXSW is to offer fans and artists an alternative to the SXSW madness, while still giving them the opportunity to take advantage of the massive collection of talent, resources, and networking capabilities SXSW affords, and unlike many SXSW events, it is completely open to the public. This is the 5th year Hillgrass Bluebilly has thrown the XSXSW event, and Saving Country Music and Muddy Roots are coming on board to give the showcase that much more support and impact. Previous XSXSW acts include Los Duggans, Left Lane Cruiser, Hillstomp, O’Death, Austin Lucas, & The Harmed Brothers.

And this is not just important to artists and people in and around Austin. XSXSW 5 will be a national event, with a national focus, yet still in the original spirit of SXSW of showcasing local talent next to national acts. For folks from Texas, the Southwest, or anywhere else that can’t make it to other big independent roots events like The Muddy Roots Festival, Farmageddon Fest, The Deep Blues Festival, etc., this might be your chance to take part in a large scale event. And for those that can’t make it at all, the event will be broadcast right here on SCM LIVE, giving rise to national, and international participation via the web.

And since the event is being held at The Austin Moose Lodge on the east side of town, just outside of the SXSW madness, it offers an alternative to Austin locals who regularly avoid the annual festivities because of the headache they create. Ample parking, huge indoor/outdoor facilities, 3 stages, yet not too far out of the city makes the Austin Moose Lodge the ideal location. And as Hillgrass Bluebilly founder Keith Mallette states, The Moose Lodge embodies:

…a revival of “lost America”, for our friends and family to have a place of our own. A place that IMPROVES & BUILDS FOR US as we bring them beautiful, exceptional music that you just flat out cant get anywhere else… and prove once again that you never know where a song might take you!

This initial lineup of bands is just the tip of the iceberg of what the two day event will include, but we wanted to make folks aware of what will transpire. Florida’s Cracker Swamp Productions is also involved, and other entities and sponsors will be coming on board soon. Stay tuned to Saving Country Music for more announcements and information on XSXSW 5 as March gets closer. 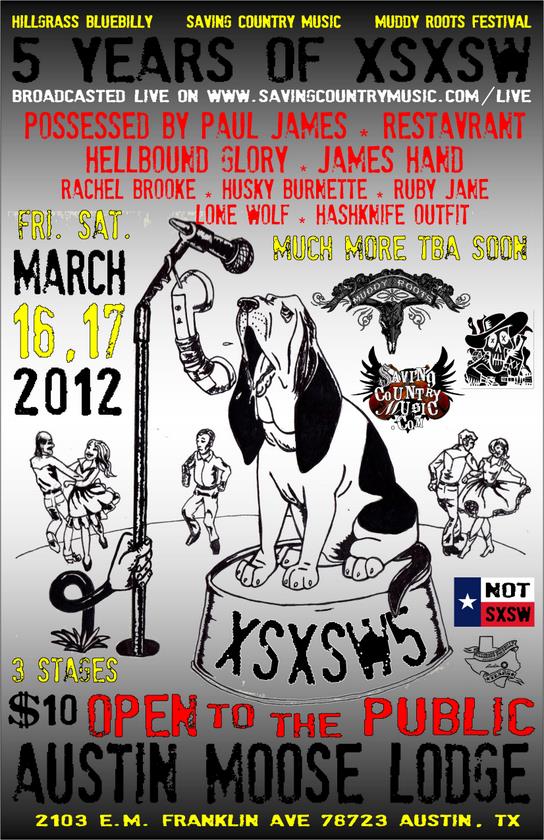