Music, and the Reshaping of The American Dream 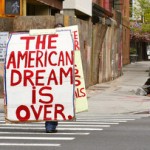 You would think that living in the wealthiest nation the world has ever seen, we could all figure out how to have enough and be happy. However we live in a world polarized between the perceived “haves” and “have nots”. As many “Occupy” folks will point out, the vast amount of the wealth is controlled by a disproportionate 1% of the few, while “Occupy” detractors have pointed out that virtually anybody living in America makes up the 1% when you consider the population of the entire world.

A question we are told to ask ourselves often is “are you better off”? When a presidential election comes around for example, you are told to ask this about yourself in the context of the last four years. Now with a multi-year economic malaise whose recovery seems shaky at best and only seems to be benefiting a few, some are asking if this “are you better off?” question will be asked between generations, that the idea of The American Dream, where you can come to this country as a poor immigrant, pull yourself up by your boot straps, afford to send your kids to college, and have middle to upper class wealth become a possibility for your family, is dying. 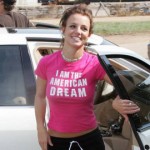 One of the economic sectors people focus on is unemployment; once again a measure whose importance or status depends on your perspective. But one unemployment factor never seen before is allowing us to rethink The American Dream from a different perspective: people leaving the workforce outright. And not just retirees, but young people who are starting their own little sustenance jobs and working for themselves, or living off of previously-accumulated wealth for years by conservation. Some of these folks work part time, and decide to spend the rest of the time with their family, or exploring the world around them instead of slaving away at the traditional 40 hour work week. 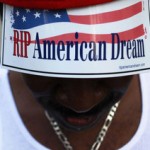 For previous generations, the only way that people would measure that “Are you better off?” question was by their personal wealth and material possessions. Now people are realizing that the wealth they were working to accumulate was at the expense of their life experience, their family life, their natural propensity as humans to explore, and many times, at the expense of their health. So many folks are deciding to go with less to get more out of life, and so even though the answer to the “Are you better off?” question economically is “no,” the answer to the general question is “yes!”

Instead of declaring the death of The American Dream, perhaps it is changing from one that uses traditional economic parameters to gauge it’s health, to ones that instead gauge the happiness and fulfillment of the individual. Instead of people craving wealth, they are craving simplicity. Money and wealth will always be important, but the promise of wealth as a bridge to happiness is a broken one. But you will not hear that from the polarizing elements of politics, that either want to use your lack of wealth to create envy, or your possession of wealth to create fear you will lose it.

And what does this all have to do with music? Well, nothing, and everything.

Music is the weapon of the great awakening, and the bullhorn in the reshaping of The American Dream. It is such a great tool of wisdom because it can be naturally engaging and universally appealing. (Though many times it is used to entrench ideology, create rabid consumerism, and as a weapon of the culture war.)

The problem with politics, religion, secularism, idealism, etc, as vehicles for change is that in the current cultural climate all of these elements are rabidly polarizing, and have a reactionary effect on individuals depending on their leanings. Only music and art can speak to the human soul universally. That is also why I am so against politics using music as a vehicle if it is done so in a direct manner. If your message can’t be subtle, and can’t be conveyed without the blurring of specific ideologies, then it cannot impact the human heart universally. And if the message cannot be blurred, the question should be asked if it is fit for the human heart?

So instead of looking at politics or ideological movements as realistic agents of change, we should look towards art and music, and let the lessons of artistic expressions enter our hearts.

So to the many people who will declare the death of The American Dream, I declare that it has just begun.