Music From Season 4 of “The Ranch” on Netflix 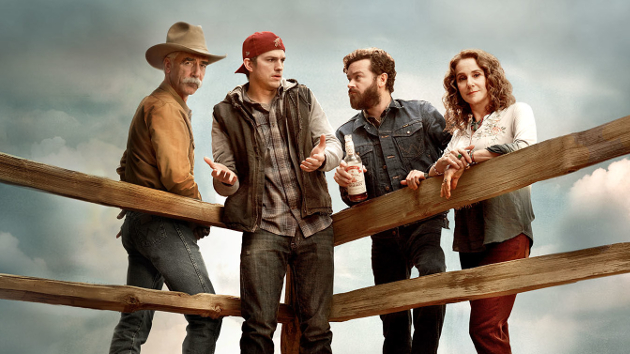 Netflix released the latest season of its comedy drama The Ranch on December 15th, and just like the first three seasons, country music plays a big role in both the dialog and the soundtrack. The series stars Ashton Kutcher, Danny Masterson, Debra Winger, and Sam Elliott. Set in Garrison, Colorado, the story is about a washed up football player (Ashton Kutcher) who returns home to find his father (Sam Elliot) struggling to keep the family ranch going. The 30-minute comedy is filmed in front of a studio audience, and feels very much like a network TV sitcom, except there’s no commercials, and the dialogue will find the occasional swear word.

In Season 4, all of the episodes are named after the songs of Garth Brooks (or songs he’s covered). The music of Patsy Cline, Ricky Nelson, Conway Twitty, Merle Haggard, Don Gibson, Brenda Lee, and more make the soundtrack, as do songs from newer artists such as Sam Outlaw, The Cactus Blossoms, Sturgill Simpson, Jason Isbell, Amanda Shires, Sara Watkins, Blitzen Trapper, Mandolin Orange, and others. Mainstream artists featured include Eric Church, Miranda Lambert, and Brothers Osborne, and Thomas Rhett makes an appearance on the second episode.

The Ranch loves to embed music in scenes under the dialog, sometimes making it hard to pick out, and Shazaming it virtually impossible unless it’s an ending scene. Saving Country Music has done what it can to identify as many songs as possible, and please feel free to pipe up with any suggestions or hints for the songs and scenes still not identified. Apparently the creators of The Ranch want to make discovering the songs part of the fun of the series, because they keep their soundtrack close to the vest.

It does appear there will be a Season 5, but it may not feature much of Danny Masterson’s character “Rooster.” Masterson is facing sexual assault claims that have meant his parting way with the show. Netflix says his departure will play into the narrative of the next season. This current season was shot before the allegations came to light.

Episode 2 – Wrapped Up in You

Episode 4 – Much Too Young (To Feel This Damn Old)

Episode 5 – More Than A Memory

Episode 6 – When You Came Back to Me Again

Episode 7 – Do What You Gotta Do