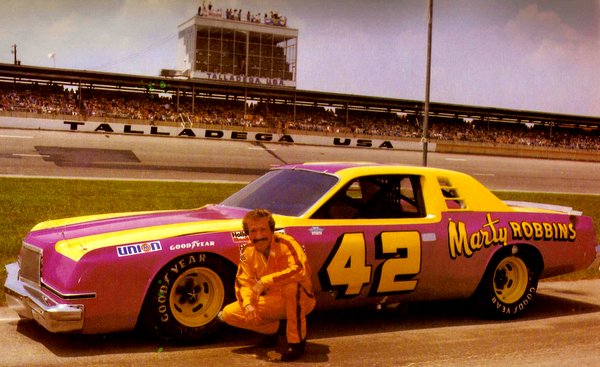 Just a week ago we were doting on NASCAR Sprint Cup driver Kyle Larson for shining a spotlight on independent country music badass Whitey Morgan with his official intro music at the Bristol Motor Speedway. Well just a week later, and Larson may have outdone himself for showing the public his passion for true country music.

At next Saturday’s (Sept. 3rd) race at Darlington for the NASCAR XFINITY Series, Kyle Larson will be driving with a paint scheme inspired by the great Country Music Hall of Famer and occasional NASCAR driver Marty Robbins. Chip Ganassi Racing and oil company ENOS are bringing back Marty Robbin’s legendary No. 42 race car with its purple and yellow color scheme for the event.

Robbins may be best known for huge country hits like “El Paso,” “Big Iron,” and “Devil Woman,” but he also had a serious NASCAR career on the side. He competed in a total of 35 NASCAR races and logged 6 top ten finishes. “You know,” Robbins joked in 1975, “I could win any race I entered. But as soon as I did Cale Yarborough or Richard Petty or somebody would pick up a guitar and start singing. So I let them win out there.”

In fact one of the most legendary stories in NASCAR history is attributed to Marty Robbins. As Saving Country Music first posted about in 2013, Marty once saved the life of NASCAR driver and now team owner Richard Childress.

On October 6, 1974 during the Charlotte 500, Richard Childress and three other drivers wrecked along the front straightaway on the 2nd lap of the race. Marty Robbins turned his purple and yellow #42 Dodge onto the straightaway doing 160 mph and was shocked to find four cars completely blocking the race track. There was nowhere for Marty to go.

“The only thing I knew was that there were people in those wrecked cars in front of me and I couldn’t hit one of them because they’d probably not walk away from it,” Marty explained to Country Music Roundup magazine in March of 1975.

“I looked down the track and saw Marty coming right at me,” Richard Childress recalled in 1975. “I knew if he hit me in the driver’s side I’d either be mangled badly or killed. There was no way of me escaping injury and no way out of his path. Then I saw something I am still not sure I can believe. Marty turned the wheel of the car right and it veered into the concrete wall.”

With a split second to make a decision, Marty Robbins decided to risk his own life by plowing 160 mph into the concrete barrier instead of smashing into the pile of cars. The crowd fell silent for a full minute until finally Marty Robbins could be seen emerging from the mangled #42 Dodge. Marty boarded a stretcher from an ambulance and was taken to the infield care center. He was later transferred to the Charlotte Memorial Hospital where he received 32 stitches to close a gash between his eyes. He also suffered two broken ribs and a broken tailbone in the incident.

After the race, a NASCAR official was quoted saying, “What he (Marty) did out there today saved at least one life and probably kept some other drivers from being maimed. He could have killed himself moving into that wall that way. But in the split second that counted he chose to possibly give his life over hurting somebody else. I don’t think you can be much more of a man than that.”

Richard Childress was quoted after the race saying, “There is no doubt in my mind I wouldn’t be here talking to you right now if Marty Robbins hadn’t risked his life to save me.”

When Kyle Larson takes the honorary Chip Ganassi #42 Marty Robbins car on the the Darlington race track on Saturday, he won’t just be paying tribute to a country music legend, but a legend of the racing world that once put his own life in peril to save another. 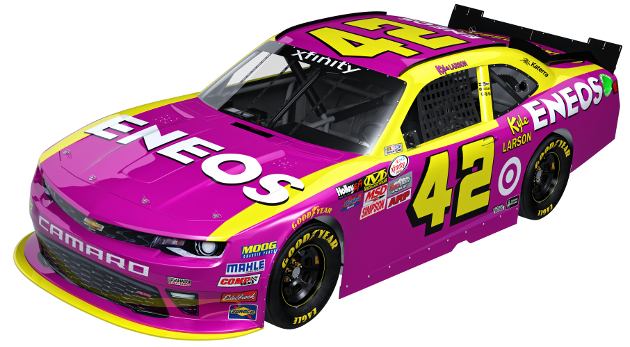