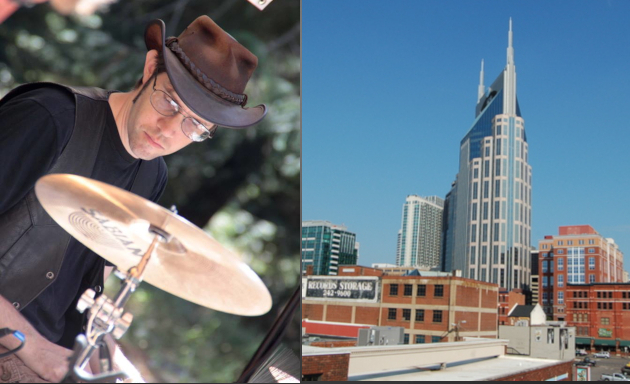 On Tuesday evening (7-9), a Nashville drummer known by music conservationists in the area as “Drummer #036” was leaving a recording session on 16th Avenue in Nashville’s Music Row district when he was struck by a vehicle. Crossing the street at a pedestrian intersection at about 9:30 p.m., he was startled and froze in a pair of headlights, and was run over by a jacked up Chevrolet pickup truck driven by one of the five singers in Nashville’s newest country boy band, “Rebel Road.”

The loss of Drummer #036 has officially plunged the population of human drummers in Nashville into the endangered species category according to environmental researchers. The surviving number of drummers in the area continue to be at risk due to the plague of electronic drum beats infecting the city, and the propensity of producers to forgo human drummers for pre-programmed rhythm tracks in the studio and on stage.

When the population of Nashville drummers began to suffer plummeting numbers at an alarming pace during the rise of Bro-Country in 2014, conservation efforts by state and local authorities were undertaken to capture local drummers and tag them with radio collars to keep track of and protect the remaining population. This has allowed researchers to catalog the few remaining drummers within the city, follow their movements and migratory patterns, and study their diet and mating habits. As a male of ripe breeding age, the loss of Drummer #036 hit the community citizens concerned about Nashville’s most threatened musical species especially hard.

“He was such a sweet, loving drummer, even if he usually smelled like the inside of a punk rock tour van,” drummer conservationist Marcy McCollugh tells Saving Country Music. “His rhythm was impeccable, and nobody was better at a shuffle beat, even if he sometimes sped up waltzes, and interrupted guitarists in practice with incessant snare rudiments when they were trying to tune. I just can’t believe he’s gone.”

Many drumming conservationists like Marcy McCollugh loved to track Drummer #036 on a mobile app made available by researchers for enthusiasts to follow Nashville’s tagged drummers each day and night as they traverse the city from recording sessions, to gigs on lower Broadway and in east Nashville.

“If you see a drummer in Nashville, don’t approach them,” says head drummer conservationist for the Nashville region, Christopher Frankenfurter. “This could startle them, make them run away to a more hospitable environment such as Texas, or potentially cause them to become a DJ or karaoke host. It’s best to leave them alone, or perhaps offer them a Red Bull or a 4-pack of sleeveless Hanes wifebeaters available at any big box department store. And of course, if they appear to be vulnerable, sick, or in danger, most definitely notify authorities.”

Kody Spanks of the boy band Rebel Road who ran over Drummer #036 pleaded Not Guilty to charges in a Davidson County courtroom, telling reporters after his arraignment, “Music must evolve.”