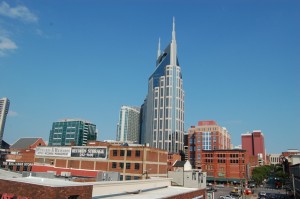 On Tuesday, Twitter personality Ann Boobus accused that a Twitter account attributed to a Nashville music publishing company that works with BMI, ASCAP, and SESAC called The Dean of Music Publishing Group, and headed by a man named Rick Dean, made multiple death threats towards multiple people, including threatening to shoot and lynch people while using racial epithets. As can be seen in the screenshots below taken by Ann Boobus, the Twitter account named “Sovereign Citizen” and located at @Unkle_Liberty (now shut down) that was changed at one point from @Uncle_RD, has on multiple occasions made death threats, while starting out harmlessly promoting the Dean of Music company, saying “#songwriters You can connect with my #publishing company by following me at @deanofmusic. Come let’s get you to the people!”

Here is a selection of the Tweets (Warning: language):

The Twitter account @deanofmusic was recently made private amidst the controversy, but a recent screenshot of the account (see below) shows the tweet, “Haha, well I guess I’m like everyone else who gets called a racist for dislike of the Obama Regime. #NRA #GOP #Impeach”. Ann Boobus Tweeted out screenshots of the threatening tweets on Tuesday, including specifically sending them to artists that use The Dean of Music’s services. The tweets in question appear to be from late in 2013. The parties Rick Dean was Tweeting to could have also been engaging in threats, but since the account was deleted, it is difficult to trace the entire history of the conversations.

Other Twitter accounts have also been attributed to The Dean of Music and Rick Dean, including, but potentially not limited to @TheDeanOfMusic .

Another Twitter account, TuneSmithPlugger made a veiled threat to Ann Boobus on Wednesday, saying “We don’t know one another but I do know you made a grave error. Just telling you this because you need to know. Take care.” The same TuneSmithPlugger also made a similar threat to Adam Lister, the Director of Policy at Nashville’s Chamber of Commerce in early April, saying, “Dude, I see you’ve been added to Rick D’s shit list. I don’t envy you at all. Not a great place to be.”

The Dean of Music Publishing Group is located on Fesslers Lane in the southern part of Nashville, about 4 miles east of Music Row. The company’s website at the moment says it’s under construction, but the Facebook page says The Dean of Music was established in 2008, and “strives to create and implement innovative industry relationship campaigns for decision making professionals including, record executives, publishers, artist, film execs and a whole lot more really cool people.”

No public explanation or apology for the tweets has yet to be published by The Dean of Music Publishing Group, or Rick Dean. 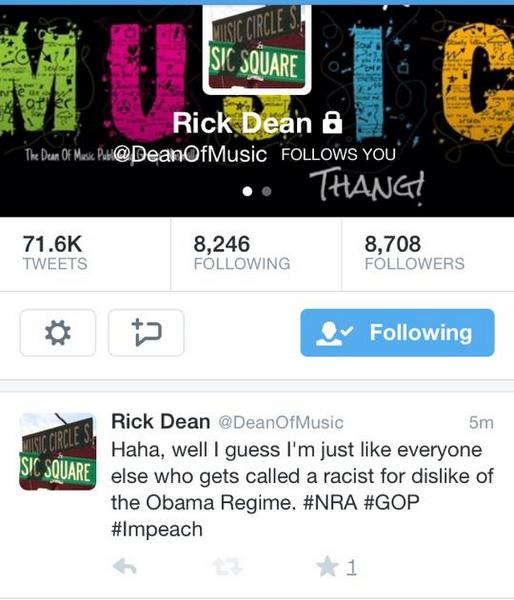