It’s that penultimate moment—that tipping point—when a town or neighborhood known for it’s cool, rich, and creatively-vibrant culture becomes so awash with interlopers, gentrifying hipsters, and retiring baby boomers that the critical mass point is reached in redevelopment, rising rents, and real estate prices and the entire thing implodes, leaving in ruin the whole reason people desired to be in the area in the first place, and taking with it the inspiration that brews beneath the streets, the collaboration that is fostered in its venues and low rent space, and a magical time and place on the musical timeline falls victim to imported money and urban renewal, maybe to be harbored once again in another part of town or another town altogether, or maybe not. 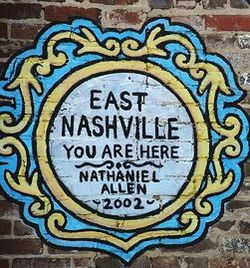 Nashville—not Music Row Nashville—but the independent underbelly of Nashville and specifically the East Nashville portion of town, have been the rallying point for the current generation of vibrant country and Americana artists that make up the heart of what independent roots music has been all about for the last half decade to decade or so, but even going back to the 70’s when songwriters from Texas were moving to the city to be closer to artists who may cut their songs. East Nashville’s affordability gave artists the ability to be flexible with their income, allowed them to be able to only work part time, or dedicate themselves solely to their craft in a way that wouldn’t be possible amidst a higher cost of living. East Nashville was the creative generator of Music City, churning out songs that inspired the rest of the town, and the rest of the industry.

But all that might be changing, or has changed, depending on who you ask.

In late June Saving Country Music published an article entitled How Nashville’s Economic Boom Could Kill Its Creativity, later to be reposed by American Songwriter. In just the short two-month period that has since passed, as more and more development breaks ground and other massive building projects get announced, Music City may have finally reached the point of no return; at least that is what some of the artists are now saying.

On August 21st, performer and songwriter Caitlin Rose, daughter of well-known songwriter Liz Rose, went on a Twitter rant about what she sees currently going on in Nashville.

“Everyone can stop moving to Nashville now. We’re full. Thanks.” Caitlin said in part. “Did y’all hear they’re tearing down all of Nashville and putting one giant Margaritaville in its place? People come to Nashville for the music. They stay for the expensive chain restaurants and condo culture. They never leave… Everyone’s got dreams of making it in Music City, USA. Most of them don’t. Like barely any of them.”

This marrying of concerns about the percentage of independent businesses and the ability for young artists to make it in the city speaks to complexity of the gentrification issue. It’s not just the low rents, or even the concentration of creative types in a certain locale that sees the formation of a creative epicenter, it’s also the inspiration that can be drawn from cool old buildings, independently-owned business, mural art and graffiti, and a menagerie of other community elements that go into building a creative forward environment. “Just saw badass dude biking down Charlotte with a raccoon on his shoulder and a box full of blankets. Fuck new Nashville and condo culture,” Caitlin Rose tweeted out a few days later.

Justin Townes Earle, son of alt. country forefather Steve Earle, has been another vocal opponent of Nashville’s gentrification. Earle grew up in the city, and regularly takes to Twitter to complain about the bulldozing of landmarks, the building of condos, and the general scrubbing away of everything Music City is supposed to be about. Earle recently told American Songwriter, “Nashville is where I was born and raised, I never got away from the city, but the city is definitely not the city that I grew up in…It’s pretty crazy, people here think they live in New York. They live in Nashville, and it’s hard to swallow sometimes. I had a fucked up childhood so I lived in over 30 houses in the city, and I think that maybe two of them are still standing, and one of them is part of an apartment complex.“

Otis Gibbs is one of East Nashville’s most identifiable musician residents, and offers a slightly different perspective. His Thanks For Giving A Damn podcast regularly features friends and neighbors from his East Nashville haunt, and he likes to hoot and harp on the East Nashville way of living regularly on Twitter.

“Amy Lashley and I moved here seven years ago from Indianapolis, but the growth in East Nashville started long before we came along,” says Otis. “People like Chuck Mead, Skip Litz, Joe McMahan, Kevin Gordon, Sergio Webb, Mike Grimes and later Todd Snider were living here and touring the world twenty years ago, or more. Back before that people like Guy Clark, Marty Robbins, Roy Acuff, Grady Martin and a lot of others lived here. This has been a neighborhood full of creative people over the last few decades, but the national media is just now catching on.”

Otis shared a picture with Saving Country Music of Townes Van Zandt, Guy Clark, and Susanna Clark on Guy Clark’s porch in East Nashville that speaks to the history of East Nashville as a bastion for creative types. 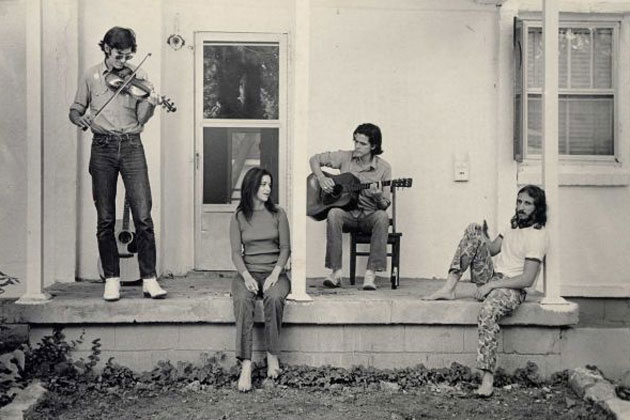 “Nashville is home to the best pickers in the world,” says Otis Gibbs. “It’s an embarrassment of riches and it’s easily my favorite part of living here. I played a venue in Zurich, Switzerland a couple of weeks ago and saw a poster advertizing my neighbor’s band. He owns the house next to mine and he’ll be playing that same club next month. The first time I ever met that same neighbor was when we both played a festival in Springfield, Illinois. He walked up to me back stage and said, “I think you live in the house next to mine.” That sort of thing happens all the time. I once learned who moved into the house down the street from me by reading his name on his road cases as he was moving in.”

Otis says home ownership for East Nashville’s musicians is one way to hold on to heart of what the community has become over the years.

“It’s always nice to see musicians in my neighborhood who own their homes. It’s cheaper than renting and if property values get as crazy around here as some people suspect, they’ll have something to show for it. I have friends in South Austin who bought their homes back in the day and have seen their homes quadruple in value.”

The problem is when those homes values increase, if the musicians aren’t already locked into ownership, they are locked out of the community in rising prices and rents, and that is the new dilemma arising for many of East Nashville’s musicians. One of the biggest points of contention in the community is the splitting of lots so that two new homes can be built on the same original lot. Along with the demolition of older apartment complexes, this has seen the inventory of older and cheaper housing in the city dry up, and with it, much of the original character of East Nashville neighborhoods. Some neighborhoods, including East Nashville’s Inglewood and Rosebank districts are looking to restructure zoning laws to help stem the tide of gentrification.

Still, growth and lot division is occurring because of the demand for more living space in East Nashville, and where there are losers, there’s winners as well. Craig Havighurst, a writer and the co-host of Music City Roots has a different take on condos and all of the commotion about Nashville growth.

Urban creative hives require urban scale and urban density, which is something I feel we’re only beginning to approach from South of Broadway all the way out to Green Hills. Two houses on one lot are a way to provide critical housing supply without sprawling. It might prove to be one of the best accidental policy ideas the city’s ever had. Because better to build in and up than out. Complaints that the houses are too large for their lots are entirely subjective and based on the look and feel of a kind of neighborhood that isn’t necessarily compatible with urban dynamism. The new people fill new restaurants and coffee shops, where those aspiring musicians find jobs while they develop. And a lot of those new arts and music professionals bought starter homes in Inglewood and Sylvan Park. We can empathize with folks who are seeing their rents rise and still acknowledge that for many, this was a good investment that will make their future more secure.

What everyone can agree on is that the cultural dynamic that exists in Nashville at the moment and has helped give rise to artists like Jason Isbell, Sturgill Simpson, Caitlin Rose, Justin Townes Earle, Cory Branan, Tristen, Lindi Ortega, many more countless names in the past, and who knows who in the future, is in every music fan’s interest in seeing preserved because of the musical riches it has afforded us for the last few years, and for decades before.